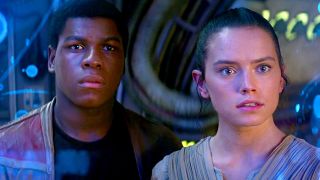 The Force is as synonymous with Star Wars as lightsabers and Skywalkers, yet have you ever stopped to think just how often it’s mentioned? Incredibly, someone has – and the result is a bonkers supercut that now means the phrase “The Force” has lost all meaning for me. Oh and, spoiler: you might never want to watch Star Wars: Rogue One again after this.

So, The Force is spoken 161 times across nine Star Wars movies. Star Wars Kids’ YouTube channel (H/T io9) took the time to uncover every single moment that The Force is brought up, from Obi-Wan in A New Hope right through to Laura Dern’s Admiral Holdo in Star Wars: The Last Jedi. Somewhere, a poor intern is sitting in a corner, crying and mumbling about The Force.

You can watch the entire supercut above and, I’m going to warn you, it’s absolutely painful. There’s one Attack of the Clones scene that seems to mention The Force every 2.1 seconds. But 161 times isn’t as actually as much as you might have expected – and the total is weighted heavily towards one movie in particular.

While an average of (*grabs calculator*) 17.88888889 (you can’t forget the nine) references to The Force in each movie seems pretty bad, it’s actually Rogue One that is the worst offender by far. Thanks to Force-loving monk Chirrit Imwe, The Force is mentioned a whopping 46 times, more than a quarter of all times The Force is brought up.

Below, you can see The Force breakdown in full:

Let's hope some of the best Star Wars movies have *hopefully* not been ruined by tat Force supercut. On that note, who volunteers as tribute to be on Force-watch with the new Star Wars movies?