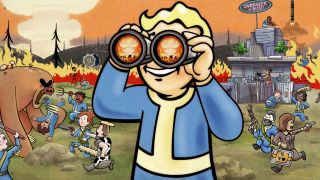 Battle royale in Fallout 76, eh? Who would've thought it. The new Fallout 76 battle royale mode Nuclear Winter was announced at E3 2019, and not wanting to waste any time, the mode was immediately made playable as a beta. A quick glance at Reddit shows that the new mode has been met with praise (mostly - this is the internet, so you can't please everyone). Curious about how the mode came to be, I had a chat with Marc Tardif, co-studio director at Bethesda Game Studios, about how Nuclear Winter came to be and whether Fortnite had anything to do with it (TLDR: it did, kinda).

Fortnite and the road to battle royale

So, was including battle royale in Fallout 76 part of the plan from the beginning? Surprisingly, despite the flood of battle royale games around nowadays, no. Yet having 52 players fight for the position of Overseer of Vault 51 sounds like a Vault-Tec experiment waiting to happen, considering how screwed-up those social experiments on unsuspecting Vault Dwellers canonically are. Tardif told me that Bethesda's plans for a new mode started out quite vague: "What we did know is that we wanted [a] game mode that allowed people to jump in and out real quick," he says. "We knew we wanted to achieve that, and we knew that that was probably going to take the form of some type of PVP thing. One of those ideas happened to be a battle royale thing … we knew that that’s risky. But it actually makes sense. We started talking about: 'OK, how can we justify it within the folklore that this would happen?' We started coming up with the backstory of Vault 51, where you spawn in Nuclear Winter. We came up with this wacky story, and everyone was like, 'That’s actually kind of cool. Let’s just run with it, and see what happens.'" Lo and behold, it worked.

Double crossing, romance, and not being sworn to carry our burdens: here's how the Fallout 76 human NPCs are going to work

That success is all because, according to Tardif, "we didn’t take the approach of trying to make a battle royale game. What we did was, we started with [Fallout] 76 as our foundation. We said: 'We have 76, and we have everything that people love about that game, and that people are accustomed to. And now we need to figure out a way to create a game mode where people can jump in and experience 76 gameplay in a much shorter period of time than you would traditionally in adventure mode.' So something that’s 15 to 20 minutes in duration." Given how short battle royale matches typically are, the genre was the perfect fit, as those games are even shorter if your participants (cough, like me, cough) have an itchy trigger finger and the habit of making poor decisions.

Making the mode feel like a natural part of the game was always at the front of the developers' minds, with Tardif saying that they specifically thought about how Nuclear Winter would work when combined with Fallout 76's traditional MMO gameplay. "The ecosystem, for lack of a better word, of what 76 is - it’s all tied together [with Nuclear Winter]," Tardif tells me. "You gain experience in playing Nuclear Winter that helps you level up for Adventure Mode," meaning that there's an added incentive to switch between the different modes for players who are new to either MMOs or battle royales. Hopefully you shouldn't be left feeling like you're playing catch-up, as all your perks help you out in battle royale, and vice versa.

How to win Fallout 76 Nuclear Winter battle royale? Bethesda says you're forgetting something

Now for the inevitable comparison: Fortnite. Minecraft might've kicked off the battle royale trend with its Hunger Games mod, but Fortnite is the game that catapulted the genre into the stratosphere. When I mentioned Fortnite to Tardif, he was open about the fact that he and his team are "obviously fans of all those games, and we play them. For us, we didn’t set out with Nuclear Winter to try to create something to compete with [other battle royale games]. This was something made very specifically for the 76 community." Hence the inclusion of monsters like the Scorchbeast and the fact that you can still hack, build blueprints, and do some lockpicking in Nuclear Winter.

The mode still has that Fallout DNA coursing through its veins, just with a constant "sense of threat that something could happen", as Tardif puts it. "But we also don’t want to take away from the fact that this is all about combat between individuals, or between spawns of individuals." So although you might find yourself facing off against Scorched in Nuclear Winter, careful AI programming in the background means that you should never feel distracted from the fact that you're ultimately facing off against 51 other Vault Dwellers.

The future of Nuclear Winter

Considering that Fallout 76 is known for having players who have set up a police force to exact justice in the Appalachian wasteland and even passionately debate an in-game tax on vending to curb inflation (yes, really), it's already astonished the developers how communicative its players are. Now that Nuclear Winter is alive and kicking, I asked Tardif whether players have been doing anything that's surprised him. "I was about to say 'play it'," he jokes, "but no. The fact that [players] are being so communicative with people who are not their friends. They’re logging in. they’re joining three other individuals as a squad ... They are genuinely having fun with strangers."

So what does the future hold? There are a lot of possibilities, by the sounds of it - with most suggestions hopefully being driven by the playerbase. "Right now, we’re really curious to see what the feedback brings," Tardif tells me. "I think that’s kind of a theme that you get throughout 76, that we created this thing, but we really want the community to help drive what it is. Like Jeff [Gardiner, project lead on Fallout 76] was saying, when we had 76, we had no way in. Wastelanders wasn’t even on our radar. But the community helped drive us in that direction. It’s the same with Nuclear Winter. We threw Nuclear Winter out into the wild yesterday, and the community is going to drive what we do with it. We’ve got some ideas, but they’ll dictate it."

I asked about limited-time events like the ones that go on in Fortnite, and Tardif was optimistic about what's potentially in store. "If the sentiment that we have about it right now continues to grow, then we will look into expanding it and adding new features, and doing some of the recurring event kind of stuff that the other games do," he tells me. For now, the team is just focusing on Nuclear Winter's initial reception. "The game mode is just taking off. I think it’s even caught a lot of us by surprise just how well it’s been received," Tardif says, smiling. "It’s awesome." You know what? He's right. With Fallout 76 having a battle royale mode and getting human NPCs in an upcoming Wastelanders update (hitting the game in Fall 2019), the game might finally be turning into the Fallout MMO we all hoped it would be.

Read the full Fallout 76 patch notes right here, or watch our video below to see the easiest locations to find Power Armor in Fallout 76.