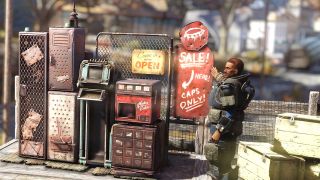 Ben Franklin once said that nothing is certain in this world except for death and taxes, and it turns out that truism applies to the wastelands of Fallout 76 too. Bethesda's latest update to the online RPG finally added a player vending system this week, which allows wasteland wanderers to sell their wares to other players for Bottle Caps, the game's main form of currency... but it arrived with a caveat.

For every sale made between two players through the vending system, a 10% tax is levied by Bethesda for the sake of curbing inflation in the user-generated economy, but the policy is causing a philosophical rift in the community between those who recognise it as a necessary evil, and those who see it as a betrayal of the free market.

How those Fallout 76 microtransactions really work

For one thing, the caps generated from this tax bracket aren't actually put back into the economy, and some players are calling for the money to be invested in the reconstruction of the Appalachian welfare state, with floated ideas including a public healthcare system or a homeless rehabilitation service that could help wandering NPCs like Grahm and Moo Moo.

More opportunistic players, meanwhile, are deploying advanced mathematics to ensure they make their desired profit on each sale against the tax, while others are avoiding the vendor system outright and trading directly with players to cut out the middle man (Bethesda), and circumvent the levy entirely.

To be fair, Fallout 76 has been suffering from a long-standing problem of inflation, in which the abundance and ubiquity of Caps in the economy leads to a depreciation in its value, as players have more money than they know what to do with. This tax, then, is helping to redress that imbalance, even while pushing some players to become full time Fallout 76 libertarians and threaten to move to the Free States. It's really only a matter of time before a full blown civil war breaks out.

Read the full Fallout 76 patch notes right here, or watch our review video below to see what we thought of the game at launch.