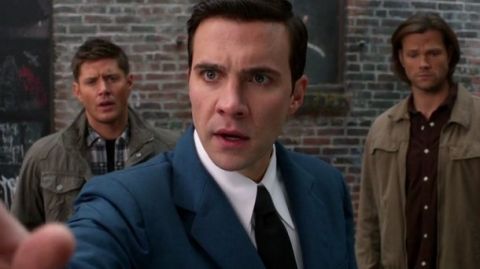 THE ONE WHERE The brothers meet grandpa Winchester.

VERDICT Blimey, where did that come from? After seven and a half seasons of misadventures in time and space you might expect Supernatural ’s engine to be running on fumes by now, but this episode is further evidence of the show’s continuing creative renaissance in season eight.

Taking its cues from The Terminator it features an (almost) unstoppable glamour-queen-killing-machine chasing Winchester Sr Sr through a portal in time to wipe out a secret society of old timey wizards known as the Men of Letters. Not only is it a barnstorming chase-thriller that works perfectly well as a standalone story, but it tugs on the heartstrings by filling in one of the few remaining pieces in the Winchester puzzle (what did happen to John’s dad?) and adds a whole new element to the lore.

The latter is particularly interesting, ordinary men who can cast incredible spells. Exorcisms, demon traps and the like have always been part of the show, and the Men of Letters take this aspect to its logical conclusion. You’ve got to question how wise it is to concentrate the entire society and it’s accumulated knowledge in one room in Normal, Illinois; but nitpicks like this are easy to forgive in a time travel story that actually sticks to the rules and doesn’t trip itself up with plot holes and paradoxes.

The emotional content scores big too. In a story where the spectre of John Winchester is directly addressed, naturally Dean’s daddy issues are at the heart of the episode. In Henry he sees someone who he can blame for all the anger he feels - Freud would have a field day. Dean (somewhat unfairly) laying some home truths at Henry’s door about abandoning his kid, and Henry pleading with Dean to let him return to 1958 and save his son are two uncomfortably affecting moments.

Gil McKinney is superb as the man out of time who is never phased by his extraordinary circumstances (anyone else detect a little hint of Castiel in the performance?), and Alaina Huffman’s last-woman-standing Knight of Hell is more a force of nature than a particularly layered protagonist, not that she needed to be any more. If there is a problem it’s that the episode is played very straight. There’s barely a joke in the whole 42 minutes, little of the wit you come to expect from the dialogue and no jolly jingles to lighten up the score. All appropriate for the content of the episode, but it does feel like the sweet, sweet powered sugar is missing from an otherwise perfectly baked sponge cake.

SYMBOLISM The Men of Letters’ symbol is a unicursal hexagram (which means it can be drawn in one, continuous line) known as the Aquarian Star. The Star can also be seen on Mary Campbell’s charm bracelet in episode 4.03 “In The Beginning”.

SPECULATION By the end of the episode the fate of The Box is left in doubt. Could the brother’s make use of that knowledge in future episodes? Seems more likely The Box will already be safely locked away by this time next week.

BEHIND THE SCENES This is the first episode directed by Supernatural ’s long-serving (all episodes but the pilot) Director of Photography Serge Ladouceur.

WHAT’S IN A NAME? Albertus Magnus is a saint. Literally. He was a German Dominican Friar from the 13th Century who advocated the peaceful co-existence of science and religion. Talk about a trailblazer.

CHARACTER Sam opts for a salad at Charlie C’s diner, whereas Dean and Henry choose burgers. Some things never change.

BEST LINE
Henry: “ I’m quite certain this is all beyond your understanding, my alpha male monkey friend. And violence will not help you comprehend this any easier.”