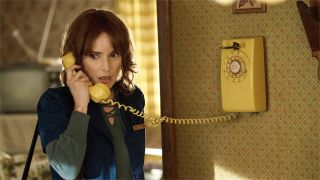 If Stranger Things season 2 is anything like the first season, it’ll surely surprise and horrify us in equal measure. Eleven’s disappearance, Will Byers returning from the Upside Down, and the will they/won’t they between Nancy and Jonathan are all at the front of our minds, but the new season will also see more than a few new characters added to the mix. And the Duffer brothers have revealed some sweet, sweet details about at least two of them.

Speaking to ET, the showrunners confirmed that Sean Astin (Sam from Lord of the Rings!) will be playing Joyce’s boyfriend, but now he has a name and a job. Say hello to Bob Newby, Radio Shack employee and Winona Ryder new beau.

"Bob is new to our weird Hawkins group, but he’s immediately memorable and I think people are going to be very surprised by where that takes them this year," says Executive Producer Shawn Levy.

Joining Sean Astin will be fellow Stranger Things newcomer Paul Reiser. Probably best known as the star of '90s comedy Mad About You, he also had turns in Beverly Hills Cop and Aliens.

The Duffer Brothers are obviously huge fans as it turns out his character's name in the script was... Paul Reiser. However, his real character name is Dr. Owens, and he's a higher-up at the Department of Energy sent in to contain the weird goings-on in Hawkins. Expect conspiracy theories a-plenty and a weird experiment or two. Ross Duffer is certainly excited about the actor involvement: "I’ve been dreaming of Paul Reiser for a while and we got him in there!"

These new characters certainly won’t overshadow our old favourites though, even ones who are no longer with us like poor old Barb (even if Will Arnett doesn’t quite understand the fuss). "Barb will not be forgotten in season 2," Ross Duffer explains. "I will say that much. There will be a lot of talk about Barb. She is still dead, though." Sad times.

Stranger Things season 2 is set to air on Netflix later this year.