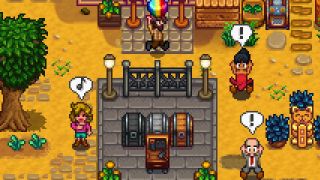 Stardew Valley has more on the way in update 1.4, the next big infusion of new content coming to the game after the long-awaited multiplayer update started rolling out last year. Developer Eric "ConcernedApe" Barone is still hiring up a team to help him work on the game, but even as his Agrarian Avengers assemble he's teasing new Stardew stuff to look forward to, from small quality-of-life tweaks to all-new areas and multiplayer modes.

Simultaneously, the next free content update (1.4) is coming along very well, it's packed with new stuff and "quality of life" features that will make playing Stardew smoother and more fun. 1 example is the ability to pay Marlon to recover a lost item when you "die" in the mines!April 19, 2019

For those of you who have never suffered a grisly fate at the hands of some subterranean creature, death sucks in Stardew Valley. Not only do you lose progress through the mines, you permanently lose a random assortment of items from your inventory. Your tools (not weapons) are always safe, but you could still drop plenty of valuable stuff. Adding a buy-back option from Marlon - the guy who runs the Adventurer's Guild just by the cave - should take some of the bite out of death in Stardew Valley without completely defanging it.

Later, Barone shared a new screenshot of the game along with a teaser for a new multiplayer option.

Hey everyone, just wanted to share this screenshot from the upcoming 1.4 update! It's a big one, & this image only reveals a fraction of what's coming. Featured here is a new farm map called Four Corners that's perfect for the much requested "separate money" option in multiplayer pic.twitter.com/wwI1nHWpvXApril 27, 2019

Every participant in a Stardew Valley multiplayer game has a good deal of autonomy, but the game only allows for the commune experience with currency pooled between each player. Sounds like Stardew Valley update 1.4 will be just the trick if you're yearning for more independence from your fellow farmers, or if you're just tired of your friend blowing all your turnip money on those damn collectible scarecrows.

It all sounds great, the only problem is we still don't have a timetable of when Stardew Valley update 1.4 will arrive. The game has maintained a rough schedule of one big update a year since the release version came out in 2016, so hopefully you'll be buying back lost items and keeping your own multiplayer cash by the end of 2019.

If you're eager for more agricultural escapades, check out our review of My Time at Portia, or watch a quick video version below.