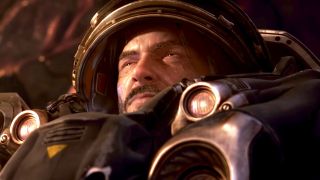 The biggest real-time strategy game of the decade is going free-to-play on November 14. Blizzard revealed the new business model for StarCraft 2 on-stage at BlizzCon, where it followed up with some quick reassurances for fans: no, this doesn't mean you'll need to start buying Vespene Gas crates from the microtransaction store to spawn units. Current players may not even notice the difference even as the game becomes substantially more approachable for new folks.

First off, the entire StarCraft 2: Wings of Liberty single-player campaign will be playable for free. If you're not familiar, that's the first third of StarCraft 2's three-part narrative, focusing on the Terran side of the conflict. Already own Wings of Liberty? Log in between November 8 and December 8 and Blizzard will give you Heart of the Swarm, the zerg-centric second part, for your trouble. All of the single player campaigns beyond Wings of Liberty (Heart of the Swarm, Legacy of the Void, and Nova Covert Ops) will be available on their own or in a $39.99 bundle.

On the multiplayer side, new players will immediately be able to take part in the Unranked and Versus A.I. modes using the full set of StarCraft 2 units. Unlocking play in Ranked Mode will require you to earn 10 First Wins of the Day in either of the two modes that are already available to you. Hopefully that 10-day time commitment will discourage some of the shenanigans that could otherwise accompany a bunch of new accounts pouring into Ranked Play. Co-op mode will be immediately accessible, though only Raynor, Kerrigan, and Artanis will be unlocked for free; all the other commanders will still require purchases to upgrade past level 5.

It's tough to believe StarCraft 2 came out way back in 2010. And I don't mean that in the usual, "My god, I'm getting old" sense. Blizzard has done a fantastic job of keeping StarCraft 2 current between paid expansions, free updates, and community events. This free-to-play change will likely be the most significant step in preserving StarCraft 2's relevance yet.