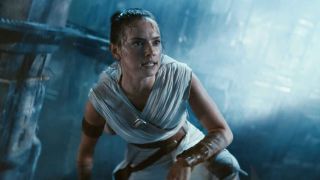 It’s true. Star Wars: The Rise of Skywalker reviews are now out in the wild – and there's already a wide range of opinions on the final chapter in the Skywalker saga.

You could scramble around the internet and have a dozen tabs open in the hopes of consuming each and every Star Wars: The Rise of Skywalker review as soon as possible. But there’s a better way. Scroll on down to find the best cherrypicked (spoiler-free) reviews, covering everything you might want to know about the movie before watching it this week.

First up, our very own Star Wars: The Rise of Skywalker review, courtesy of sister publication Total Film. The score? 4/5. The consensus? “Bumpy as the ride sometimes is, though, no one can accuse The Rise Of Skywalker of stinting on action, emotion, planet-hopping, callbacks, fan-servicing, or, well, anything Star Wars.”

There are plenty of other outlets who are slightly more reserved, while others praise the sense of adventure present in J.J. Abrams’ film. Episode 9 is being described as everything from a “colossal failure of imagination” to “extremely entertaining” and everything else in-between. Here’s the best of the rest in our Rise of Skywalker review round-up.

“As much as Abrams knows to deliver what the fans want, he's careful to add quieter moments into the mix too. It's here where The Rise of Skywalker shines with emotional beats that fans won't forget, as well as crowd-pleasing payoffs that have been decades in the making. It is fan service, but often done in service of the plot and they don't feel just thrown in for the sake of it.”

“The Rise of Skywalker falls somewhere between an overstuffed fan-service finale and a yawnfest. If The Force Awakens kicked off a new cycle in the franchise and The Last Jedi set it up to push beyond its familiar patterns, The Rise of Skywalker for the most part runs screaming in the other direction.”

“The big questions get answered, but cannot be discussed further, for the time being. Let’s just say some old Star Wars traditions die hard... if you’re going to do a send-off this huge, there are a lot of goodbyes to say, and a lot of loose ends to tie up. The fact that The Rise of Skywalker manages most of them and within a vaguely coherent story is something of an achievement in itself”

“Maybe there’s no escaping that the final entry of this series, coming 42 years after the original Star Wars is — at best — going to be less a brilliant piece of stand-alone escapism than a kind of exquisitely executed self-referential package”

“It’s enough to say that story arcs that began with The Force Awakens—Rey’s temptation by the Dark Side, Leia’s longing to win back Ren from the clutches of the First Order—are largely resolved, though to what degree of satisfaction for the Star Wars faithful remains to be seen. If the cast is any indication, by the end of this nine-part saga fans might be more worn out than exulted. Flop-sweating through a numbingly paced succession of battles that increasingly take place in dimly lit and desolate settings, even the younger actors look fatigued and are in no part helped by rote and apathetic cameos.”

"The story concludes (sure!) the nine-part saga that famously began with a tax dispute on Naboo. The final act aims for tearjerkery with sincere appreciations of franchise lore. Don’t buy it. There’s always been a secret cynicism underpinning Abrams’ Star blockbusters, which adrenalize the pop-est culture of his youth and avoid anything requiring originality or imagination. Now he’s left grasping for source material he hasn’t already replicated — and one late montage even copies a sequence added into Return of the Jedi’s 1997 Special Edition. We need a new franchise designation for this stumbling, bloodless conglomeration of What Once Was. Rise of the Skywalker isn’t an ending, a sequel, a reboot, or a remix. It’s a zombie."

“This new trilogy just seemed to make things up as it went along – and while that was certainly true of the original trilogy to some extent, there’s a reason it’s generally considered wise to have an endgame in mind. To that end, The Rise of Skywalker chooses to marginalize and sideline characters and themes The Last Jedi established in order to pivot to its new destination, choices that will surely be viewed as a vital course correction by some and fearful pandering by others.”

“Aping the past while revamping it into the future has been built into Star Wars’ DNA from the very beginning. So J.J. Abrams’ finale, Star Wars: The Rise of Skywalker, with its aggressive, relentless copycatting of the past, should fit thematically into Lucas’ vision. But it doesn’t feel like it’s respecting the series’ past. It’s more like Abrams is obsessively hiding behind it.”