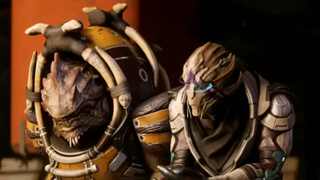 It's no surprise that Mass Effect: Andromeda fans have already picked out their future space-husbands and space-wives, nor is it a surprise that there's fanart aplenty of said video game crushes out and about on the internet. What is a bit of a surprise is how clean a good chunk of this shipping art is, with our heroes hugging - that's right, just hugging, clothes on - in a wholesome and safe for work way.

Tumblr in particular seems to be a hotbed for fanart portraying this semi-platonic act of affection, with each member of the Andromeda crew represented - save for our Krogan crewmate Drack, but I don't think he's the hugging type. But otherwise, take a look and enjoy:

And speaking of warm and fuzzy feelings, don't forget you have until tomorrow, March 1, to vote in our poll for which Andromeda character you'll romance first!