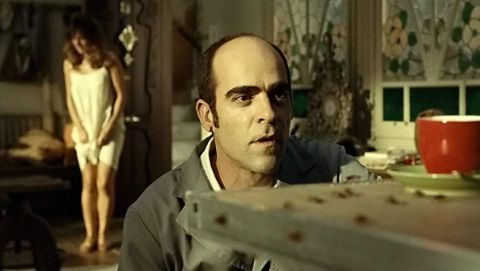 In horror, nasty is easy.

César (Luis Tosar, so memorable in Cell 211 ) is the superintendent in charge of a block of Barcelonan flats.

He has a sick mother, an angry boss and a particular fondness for the lovely Clara (Marta Etura, also from Cell 211 ), one of those pleasant ladies who are always smiling at the world. Sometimes he even lets himself into her apartment when there’s no one in. And sometimes when there is...

Without giving too much more away, let’s just say César has motives so ulterior you simply won’t believe the lengths he goes to.

The idea of someone seeing who we are when we think we’re alone is already a deeply disturbing one, and while Balagueró’s sunny visuals and swing soundtrack keep things deceptively peppy, Tosar quietly creates one of the screen’s creepiest, most credible bogeymen.

And yet there’s something about seeing the world through his eyes that means you don’t actually want César to get caught, and Balagueró and writer Alberto Marini have great fun with this duality.

When he’s on duty, César prefers to call Clara “Miss” while playing vicious power games with spoilt Ursula (Iris Almeida), a pint-sized Machiavelli but a schoolgirl all the same.

It’s these shuddersome little details that make Sleep Tight both tense - ludicrously so in some of the later scenes - and troubling.

Because we’re complicit in César’s deceptions, we find ourselves forced to care about a completely unconscionable character.

This not only makes for a brilliant watch, it makes the viewer feel violated too.