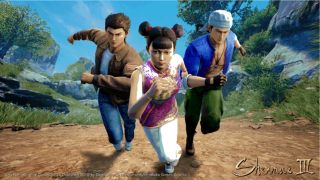 Shenmue 3's first DLC just got a release date, and it's sooner than you'd think. 'Battle Rally' will drop on January 21, and will offer "fresh gaming activities in a race unlike any other, as contestants engage in head-to-head battles whilst racing their way through the course."

For the first time, you'll be able to step into the shoes of another protagonist - either Wuying Ren or the newly introduced Wei Zhen, Ryo's sparring partner. Choose between those two or Ryo Hazuki, lace up your sneakers, and prepare to race for glory and new rewards. There aren't many other details about this DLC, which leaves a lot of unanswered questions like how the hell is Ryo going to feel fast, or are these races multiplayer? Stay tuned, as we'll update this story as needed if we get any more details.

If you already have the Complete DLC Collection, you'll get 'Battle Cry' the day it launches. If you'd like to purchase it separately, it'll be $7.99 / £6.49 in the PlayStation Store or Epic Games Store. There's no word yet on when the other DLC will roll out, or what it will entail, but hopefully it'll be as bizarre as this one. We know there will be multiple pieces of DLC, but other than 'Battle Rally', what will be featured in this future content is a mystery. Shenmue 3 broke a nearly 20 year long hiatus when it dropped in November 2019, so I guess there's no rush to give us more details.

Believe it or not, Yu Suzuki is already thinking about Shenmue 4.