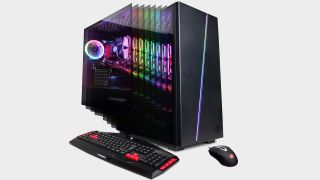 Even though the sales season is a week away, there are some great deals starting to appear in the wild. And this right here is a Black Friday-beater if you're on the look out for a considered, pre-built gaming PC that won't break the bank. Walmart is offering a cheap gaming PC deal that consists of a CyberPower machine housing an i5-9400F processor, a 2060 Super graphics card, 8GB of RAM (a little low but you can add more), and a 240GB SSD and 1TB HDD storage combination that comes in at $869 - a saving of $200. This kind of build is a chin-stroker as it has the beans to be a competent gaming machine for all the latest and greatest as it stands, but would also benefit from some tinkering and modifying in an ideal world. Hence why it would make an ideal first gaming PC machine and/or one that could be a project too. That RAM would ideally be doubled to 16GB so why not do it yourself when you feel more confident. Maybe that processor could be boosted to an i7 (mobo dependent).

The deal also throws in a mouse and keyboard, and while they may be good enough to start you off, you'll likely find that are a little sub-standard. As a result you'll want to browse our takes on the best gaming mouse and the best gaming keyboard that you can get right now.

Overall, however, this is a good value deal and it's the inclusion of the 2060 Super graphics card, that really makes it. The 2060 Super is a $400-450 card on its own so getting that in a pre-built for comfortably less than $900 represents excellent value. It's likely to be a deal that gives the actual Black Friday gaming PC deals a run for their money when they appear next week.

You'll see a lot more deals and offerings go up across all the retailers as of this week with Black Friday looming. However, we'll be covering all the best Black Friday game deals to make sure you can be presented with the very best in one easy place.

You'll also want to team your new PC with an equally good gaming display so check out the our guide to the best gaming monitors here.