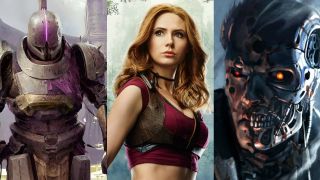 1. Destiny 2 Season of Dawn brings back a fan-favorite Guardian

The Season of Dawn is the next chapter in Destiny 2 Year 3, and while it's led by Osiris the Warlock, all eyes are on Saint-14 the Titan. Saint-14 appears throughout Destiny lore and was briefly mentioned in Destiny 2's Curse of Osiris expansion, but we've never truly met him on account of him being dead. Thanks to the latest timeline McGuffin, that's about to change. And not only are we going to save Saint-14, we're going to fight alongside him in a new activity called the Sundial, all while earning some of the coolest-looking mods and armor in Destiny history. It remains to be seen how well the season performs without a new expansion to prop it up, but there's no denying that the Season of Dawn is freaking awesome on paper.

What: Destiny 2 Season of Dawn DLC
Where: PC, PS4, Xbox One
When: Tuesday, December 10

We live in a golden age of video games. Never before has such a huge selection of quality games arrived in such a regular rhythm from developers of all sizes. There are so many wonderful options on all kinds of platforms that you may have a hard time appreciating them. Terminator: Resistance is here to remind you of another time - a time when movie games came out, and they were mediocre, and you still played them just because you had nothing better to do. Our own Alex Avard expertly summed it up as "the best Terminator game of all time, and the worst game I've played this year" in his preview, and there's something very wholesome about the whole thing. Pick up Terminator: Resistance (maybe just a rental), spend a few hours with it, then go back to enjoying our golden age of video games.

What: Terminator: Resistance
Where: PC, PS4, Xbox One
When: Tuesday, December 10

3. Tune in to see which titles will win big at the The Game Awards

It's one of the biggest nights in gaming and Geoff Keighley wouldn't have it any other way. Tune in to this year's The Game Awards and see which titles will take home pride, glory, and a beautiful paperweight. Which game will win the illustrious Game of the Year award: will it be Hideo Kojima's latest epic, Death Stranding, or a remake of 1998's Resident Evil 2? Will Control step in and wrench the trophy away from them all? Beyond GOTY, the night's categories include Mobile Game, Content Creator of the Year, and Esports Team, so all of gaming will be well-represented.

We've come to expect a big musical performance from The Game Awards, and this year we're getting 90s punk darlings Green Day, Kojima's favorite band, CHVRCHES, and a return of The Game Awards orchestra. Keighley promises the music will tie back into video games in an interesting way, so tune in and see what the night is all about.

What: The Game Awards
Where: LA and online
When: December 12

4. The Expanse returns from the dead with a new season on Amazon Prime

Fans of The Expanse have been through a galaxy of emotions since its cancellation over 18 months ago. SyFy didn’t pick the sci-fi series back up for its third season and so it was left to Amazon Prime to deliver The Expanse season 4 – with the promise of more to come down the line.

It picks up right where season 3 left off, with Holden and the rest of the Rocinante crew embark on a journey beyond the Ring Gate and towards New Terra. What waits for them there? Well, judging by the trailer, interstellar intrigue and plenty of things that want them dead. Same show, brand new platform. You can rest easy, Expanse fans: the show is in good hands for the foreseeable future.

What: The Expanse season 4
Where: Amazon Prime
When: December 13

5. Jumanji: The Next Level takes thing to the.. Well, the next level

When Sony announced Jumanji would be coming back with The Rock, Kevin Hart, Karen Gillan, and Jack Black as its stars, nearly everyone was skeptical. Yet, despite all odds, Jumanji: Welcome to the Jungle was a surprise success, both with the critics and the box-office. A sequel was inevitable, and The Next Level is here to ratchet everything up. All four stars are back, with newcomers Awkwafina, Danny Glover and Danny DeVito alongside them. What’s that? The Rock will be playing the avatar for Danny DeVito’s character! If that’s not a recipe for comedy gold, then I really don’t know what is.

What: Jumanji: the Next Level
Where: Movie theaters
When: Friday, December 13