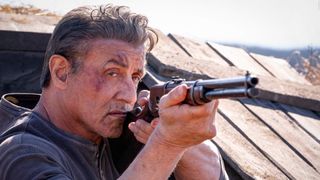 Look who's back again! Sylvester Stallone will return as Rambo once again later this year in Rambo: Last Blood, the fifth movie in the series. This time, though, Rambo's a bit damaged.

Speaking to Total Film in an exclusive interview, Adrian Grunberg gave us the lowdown on what to expect from the forthcoming film, hinting that this Rambo movie could be the character's version of Logan - the Wolverine film that introduced the world to a gritty take on the X-Man. For one thing, the movie will explore Rambo's PTSD from his years serving his country.

“It’s definitely much more tackled in this one," Grunberg told Total Film. "That’s one subject we really wanted to delve into, because it has become throughout the years a much more widely used term and a much more widely talked about subject. And Rambo being who he is… is the prime candidate to suffer from it, and he isn’t going to shy away from it. It makes him more human.”

While avoiding specifics, Grunberg revealed that the movie will see Rambo head "south of the border" to save a young girl (Yvette Monreal) who has been captured by the Mexican cartel. He added that, while there has been some criticism over the violence in Rambo, they decided not to "tone anything down".

“The violence is there but I think you’ll find that – although it is at times very violent – there is a thought process to it," he said. "Rambo, the character, he doesn’t kill anybody who doesn’t deserve to die.”

Grunberg also discussed whether the movie would be the last Rambo film. And while there's still potential for sequels, Grunberg says Last Blood "closes the circle."

“And I have to say," he added, "I hope – on a personal and selfish level – this is the last one. There’s a very poetic feeling to this movie. If it is the last one, I think people will be thankful for it. They will be… satisfied.”

For more on Rambo: Las Blood, which reaches cinemas September 20, pick up the new issue of Total Film magazine, which goes on sale this Friday, July 26.

If you’re a fan of Total Film, why not subscribe so that you never miss an issue, and you’ll also get exclusive subscriber-only covers like the one below delivered directly to your doormat before it hits shelves? What are you waiting for?