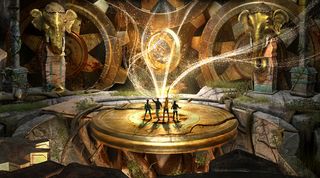 Today Ubisoft delivered both good and bad news for Prince of Persia fans. The good news: the studio hasn't forgotten about the beloved IP and is still using it to make time puzzles. The bad news: rather than another sterling action-adventure game, its latest time puzzle is a location-based VR escape room which is coming this spring. That said, speaking as someone who's recently gotten into escape rooms, this thing does sound kind of cool.

Prince of Persia: The Dagger of Time is Ubisoft's third escape room in this style after Beyond Medusa's Gate and Escape the Lost Pyramid, which are loosely based on Assassin's Creed Odyssey and Origins respectively. Think of it as an augmented reality attraction where you and up to three friends solve puzzles in a projected environment with the aid of a VR headset.

"In the story, players are summoned by Kaileena, the Empress of Time," Ubisoft explains. "They are asked to help her to stop the evil plans of a Magi who is attempting to restore the sands to the Hourglass of Time and create an army of Sand Monsters. To successfully escape the fortress, players must use cooperative teamwork and problem-solving skills to complete objectives, utilizing powers such as time control from the dagger of time."

The Dagger of Time will launch later this spring at over 300 locations around the globe. If you're up for it - and I have to admit, rewinding time in VR does sound cool, if potentially vomit-inducing - you can look for a nearby location on Ubisoft's website.

2019 gave us Arise: A Simple Story, the perfect blend of Journey and Prince of Persia. May it fill the time dagger-shaped hole in your heart while we wait for potential developments on the franchise.