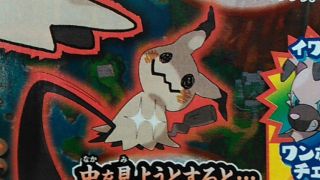 Well, the monster design of Pokemon Sun and Moon has officially come full circle. Japanese manga magazine CoroCoro has revealed two new ad-horrible beasts coming to the games, and one of them is a creepy Pikachu cosplayer.

According to fan site Serebii.net's translation, Mimikkyu (the English name may differ) is a Ghost/Fairy type Pokemon that just wants to be loved by people. And what better way to attract love and attention than to cobble together an unnerving Pikachu outfit based on 20-year-old merchandise? Well, I can think of several better ways, but I can't fault Mimikkyu for trying. It also hates sunlight, so the Pikachu getup serves as a convenient/creepy way to stay in the shade.

The other new Pokemon revealed by the magazine is Kiteruguma, a friendly looking Normal/Fighting type bear Pokemon that loves to give hugs. Sounds great! Except it doesn't know its own strength and could easily hug a tree in half, never mind your rib cage. Maybe it would be better to give both of these new Pokemon a wide berth, now that I think about it.

Pokemon Sun and Moon are set to hit Nintendo 3DS on November 18, 2016, assuming the world economy hasn't been completely reconfigured around Pokemon Go by that point.