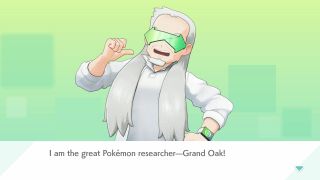 Cloud-based subscription service Pokemon Home has today launched on iOS, Android, and Nintendo Switch, and has surprised fans with the introduction of a brand new Poke-professor, Grand Oak.

This version of Professor Oak sports long hair, funky sunglasses, and an accompanying goatee to complete his, uh, "look", and is here to help you navigate all of Pokemon Home's new features, including the ability to transfer Pokemon caught from previous games into Pokemon Sword and Shield.

Some have suggested that the appearance of Grand Oak is developer Niantic's way of communicating that the game exists in an entirely separate universe to the rest of the Pokemon games; sort of like a meta-dimension ruled by an all-seeing, all-knowing deity... one who just happens to enjoy wearing neon green arrow-shades.

Grand Oak introduces himself as "the great Pokemon researcher" in Pokemon Home, but that's all we really know about him so far. And while Professor Oak's own cousin, Samson, did appear in Pokemon Sun and Moon, it's unclear how Grand Oak is related to either of these famed Poke-academics, or if he even bears any relation at all.

It's likely that future updates to Pokemon Home, and indeed the release of more Pokemon sequels, will reveal more about this mysterious figure but, right now, he's basically a walking amalgam of the crazy uncle that ruins your family's Christmas dinner each and every year.

For more, here's everything you need to know about Pokemon Home Premium pricing, or watch our latest episode of Dialogue Options below.