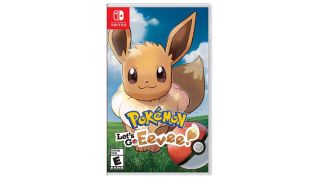 Pokemon: Let's Go, Eevee! has had a price cut of 50% as part of the Amazon Prime Day Game deals. It will now set you back just $29.99 on Amazon to adopt an Eevee and enrich your life in the most adorable Pokemon game since Yellow came out and let Pikachu waddle behind us in 1998. It's worth noting that the Pikachu version is the same price.

A throwback to the Kanto region, Pokemon Let's Go makes a number of wild changes to the formula, including letting the player see which wild Pokemon are hiding out in the tall grass. No more random encounters! If you've got a Pikachu loving mortal enemy you can also play together in co-operative multiplayer - both Let's Go games can be controlled with one Joy-Con each, or the throwable Pokeball Plus peripheral which can be purchased separately.

Pokemon Let's Go: Eevee! | $30 on Amazon (was $60)
Adopt one of the most adorable and unique Pokemon and fight to become the best trainer in Kanto in Let's Go Eevee - now just half price on Amazon!
View Deal

Capturing Pokemon is also very different in Let's Go Eevee, utilizing an interface which is strikingly similar to Pokemon Go where you have to chuck Pokeballs at a potential capture's head and coax them into joining you with plenty of berries.

If anything, Let's Go Eevee would be the perfect antidote for Pokefans who can't wait for the arrival of Sobbl- wait, I mean Pokemon Sword and Shield later this year, which looks to take players to the Galar region, seemingly inspired by the landscape of the United Kingdom.

You may also want to check out our list of the best Nintendo Switch game deals if you're looking for extra inspiration for games to add to your library this Prime Day.