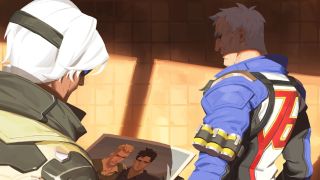 Overwatch expands its roster with new heroes a few times a year, but sometimes it's just as exciting to learn more about one that's been here from the start. A new short story from Overwatch lead writer Michael Chu is our first real look at the personal life of Jack Morrison, the former leader of Overwatch who now fights crime Punisher-style as Soldier 76. And it turns out Jack used to be in love with a man named Vincent.

You can read the piece, titled Bastet, here (it's only 14 pages complete with several large illustrations). Or if you just want to skip to the part where it turns out Overwatch's living, breathing grizzled warrior archetype also turns out to be a proud member of the near future LGBTQ community, I'll copy it below.

BASTET: A fierce protector arises from the shadows . . . https://t.co/YLLH1vb5XB pic.twitter.com/OcA6mceQP1January 7, 2019

"It was the other person in the picture that surprised her - a dark-haired man, dressed in a casual, black button up shirt. Jack’s arm was around his shoulder.
Vincent.
“Vincent… I haven’t thought about him in years,” Ana said. “Still keeping a candle lit for him?”
Jack shook his head. “Nothing like that.”
“You’ve never looked in on him? You must have been curious. All the surveillance power in the world. I bet Gabe would have put a Blackwatch agent on him if you asked,” Ana said.
Jack glared at her.
“Okay, touchy subject.”
Jack laughed. “He got married. They’re very happy. I’m happy for him.”
Ana was unconvinced. In the early days, Jack talked about him often, floating a dream that the war would end quickly, and maybe he’d have a chance to return to a normal life.
But a normal life was never the reward for people like us.
“Vincent deserved a happier life than the one I could give him.” Jack sighed. “We both knew that I could never put anything above my duty. Everything I fought for was to protect people like him… That’s the sacrifice I made.”

Should this be notable? Nope, Soldier 76's old flame should just be a little bit of character development. But with how rare it is to see canonically queer characters at the forefront of blockbuster video games it's totally worth celebrating. And it's pretty cool that this comes after Tracer turned out to be going steady with a lady named Emily. Tracer and Soldier 76 are arguably two of the three most iconic Overwatch characters (along with Winston, who loves peanut butter and science), so this isn't just tossing in a token side character for representation either.

Since it's not as if most players will ever read Bastet, this would normally be the part where I complain about Blizzard failing to showcasing queer relationships in Overwatch itself. But Overwatch doesn't have a traditional in-game story to speak of, so almost all the character development comes from external avenues... unless you count Genji shouting "Merry Christmas!" in the middle of combat against a clone of himself as canon, in which case Overwatch's story is really weird.

Find more to play in our list of the best online games.