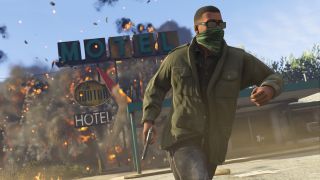 Asinine statement alert: GTA 5’s world map is really fantastic. You and I have both spent enough time throwing Chop’s ball into oncoming traffic under the setting Los Santos sun to feel that. I don’t need to tell you why it’s fantastic. So instead I’ll tell you why, despite my best efforts, I still feel so distanced from it after playing 40+ hours on both PS3 and PS4 versions.

I thought the addition of a first-person viewpoint to the current-gen version would remedy the detachment I felt towards that bustling city, the constant sense that I was an unwelcome stranger no matter how hard I tried to acclimatise. Looking at GTA 5 through the prism of the central trio was the source of my odd sensation, I figured, after all but completing it on PS3 - which died two missions before the end. Going behind their eyes would not only make the world easier to process on a visual level, but more personal, too. Am I right?

Yeah… no. I’ve become so obsessed with trying to break through my detachment that I’ve played the entire game in first-person so far. Every second of it. Flying choppers, shooting thugs on yachts while driving (profoundly difficult), people-watching at pedestrian crossings at Rockford Hills. I drink in much more of the world from this viewpoint, true. But GTA 5 still keeps me at arm’s length because of its writing.

The parody here isn’t just vicious, it’s all-encompassing; there are sneering reminders of how dreadful the modern world is between every song on the radio, walking caricatures of rabid consumerism idly exchanging vapid one-liners on every street corner. You can’t even buy a mountain bike on your phone without first reading a waspy remark about cycling’s obsolescence in the age of cars. It’s a world in which only once voice exists, and it’s one of the most misanthropic you’ve ever heard.

That’s why I feel so unwelcome here. There isn’t a tiny crumb of hope anywhere in Los Santos. Not one earnest character who’s just earning their keep without either demonstrating or pointing a spiteful finger at one of western civilisation’s vices. I get it - Los Santos is a place of catharsis in which to vent your frustrations with modern life. But what are you left with when you’ve set fire to the mime artists and bludgeoned the double-parkers with a police baton? When you’ve laughed along with the radio at rock music’s irrelevance and pop’s vacuum? Do you feel better? Do you ever get the feeling you’ve made the world a better place?

I don’t. And that’s why I can never get comfortable in Los Santos. They’ll never accept me at Ponsonbys no matter how many $6,000 suits I buy. The staff of Vanilla Unicorn will never save up enough money to fund a college education. And somewhere in the distant fairy light miasma of the city, in every moonlit photograph I take, there’s an NPC saying, “I’m going for my fourth stomach stapling next week.” To no one.

I’m suffocating on GTA 5’s bile, and I don’t want to leave because its geography is so wonderful, and there are so many things I have yet to do. Is there ‘biting parody: off’ button?