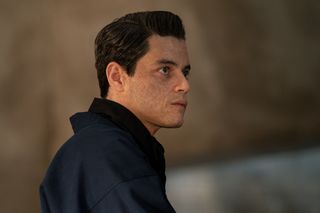 "History isn't kind to men who play God," Daniel Craig's James Bond tells Rami Malek's villain, Safin, in the first trailer for No Time to Die, known to many as Bond 25. The antagonist is spotted multiple times through the trailer and appears to be wearing a white mask to cover facial scars. Yet, we still know very little about his plan, how Blofeld's involved, and how Safin got those scars.

For some much-needed context, GamesRadar+ and Total Film sat down with director Cary Joji Fukunaga to discuss the trailer and Safin's role in the movie. "Every tyrant and villain is trying to play God in some way, right?" the filmmaker said, remaining coy about specifics. "They see themselves higher than everyone else. They’re pulling the strings. There’s an entitlement there, and a playfulness. So yeah, I guess all the great villains play God."

What about those scars? How did he get them? "I can’t really tell you about that one," he said, though Fukunaga was more illuminating on the mask itself. "I’ve always liked those Nioh masks, and I like the duality of them. So their expression subtle changes, based on the angle of the face, which I like. It’s just almost the blankness of the expression, and the paleness of it. So that compared with the wintery landscape when we introduce that mask – to me, it just went really well together. It was harmonious imagery."

You can read our full Bond 25 trailer breakdown with Fukunaga for more details on No Time to Die. The movie opens in UK cinemas on 2 April 2020.