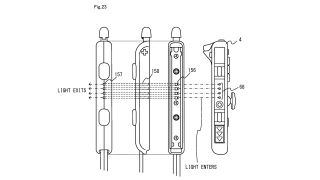 The patent includes a detailed description of the new Joy-Con attachment, including how it will work in practice with the Switch's touchscreen functionality, and how the attachment slides onto the Joy-Con controllers just like the current wrist strap version.

With diagramed images of the new touch pen feature shown, the patent states that the touch pen will cause the Joy-Cons to vibrate when objects are touched on screen. Interestingly, it also demonstrates how the stylus-like feature can draw thin lines on the screen, with the ability to also draw thicker lines by pushing what appears to be the X button on the Joy-Con.

The patent appears to have been filed in June 2019 around the same time as the release of the stylus pen Nintendo put out for use with compatible games such as Mario Maker 2, where you can sketch out your own Mario courses using the stylus. The pen also works with recent releases such as Dr Kawashima's Brain Training.

The addition of a touch pen stylus that actually attaches to the Joy-Con themselves is an interesting move. While there are plenty of games you could use the stylus with already on Switch, the patent could also hint that more games that make use of this functionality may be joining the Switch library in future.

Here are all of the upcoming Switch games for 2020 (and beyond).