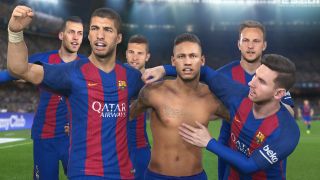 Konami has announced a new deal which will see FC Barcelona become a ‘premium partner’ to PES 2017 for three years and, it says, hugely benefit the upcoming game as a result. Case in point: topless Neymar.

The pairing will see Barca stars’ faces “and expressions” faithfully recreated in-game, right down to the Brazilian striker having the correct tattoos. But player authenticity won’t merely be visual, says Konami: “Team ID and Player ID systems [will be] used to ensure the PES side perfectly reflects the overall and individual playing styles of the Catalan side and its many stars,” it insists.

Historical Barca kits are also promised, along with Barcelona legends for use in MyClub mode. (The PES equivalent of FIFA 17 Ultimate Team.)

In real life, the link-up will mean PES 2017 advertising around Camp Nou, as well as a “visible presence within the match day experience".

"This is a real statement of intent for us,” says Konami president Tomotada Tashiro. “By working closely with a team of Barcelona’s stature we can introduce the PES series to a huge global fan base. This partnership will deliver access to the very best players in the modern game and to one of the world’s most respected and ambitious clubs. The PES series is famed for its realism and control, so the fit between such a skilled team and a game that celebrates such ability is perfect.”