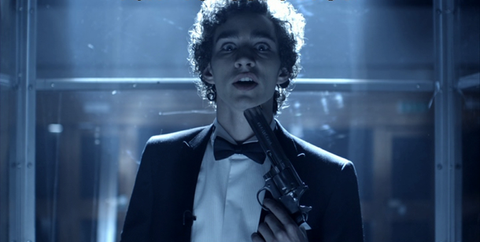 THE ONE WHERE The Misfits become a boy-band-like phenomenon, and have to deal with a jealous milkman.

VERDICT Until about five minutes from the end this is a brilliant episode, as perverse, smutty, inventive and hilarious as we’ve come to expect from the show. The story takes the idea of the Misfits finding fame into unexpected areas and boasts possibly the freakiest villain the team has yet come across – the show’s first true supervillain. The guy who plays “Le grande fromage” is excellent too – there’s a maelstrom of madness going on behind those eyes even before he flips.

There are too many great moments to list them all but the super-healer getting impaled on her own Mother Theresa Young Humanitarian award (“Rub it better!”), and Nathan blowing his brains out on national TV in a show tastefully called Oops, There Go My Brains are classic moments of Misfits’ black, perverse humour. You also go to love Nathan’s suggestions for superhero names – Captain Invincible, Mr Backwards (“I sound retarded!”) and The Invisible C***. Can’t see action figures of that last one on sale down Toys’R’Us.

But then it all goes wrong at the very end, as the show hits the reset button big time, and renders the episode ultimately rather pointless. There’s no fall-out, no twist, no lasting consequences. At least you presume there are no lasting consequences, because Curtis never knew what was going on between Alisha and Simon, so that plot development must have been erased from the timeline (unless we’re supposed to assume that the one glance Curtis got of Simon in kick-ass mode was enough of a tip-off, but it seems unlikely). Shame, since the scenes where Simon discovers his future were absolutely electrifying. Ultimately, it simply leaves you annoyed that Curtis’s power is a really irritating get-out clause that could be used to wind up any episode. Where’s the drama when the death of any of his close mates will just mean “rewind time”?

SPECULATION Presumably the lactokinetic guy could have made women’s breasts explode. Too gross even for Misfits ?

NATHAN’S GROSSGASMS Who knew that coming, puking and shitting yourself all at the same time is called, “Tripling”? See, the show is educational as well as fun.

MUSIC How weird that mere weeks after Chuck made memorable use of Grieg’s “In The Hall Of The Mountain King” the classical piece crops up again in Misfits ?

BEST LINE
Nathan: “You expect me never to see my mum again? Who’s going to do my washing?”

Check out our exclusive video interview with the stars of Misfits here .