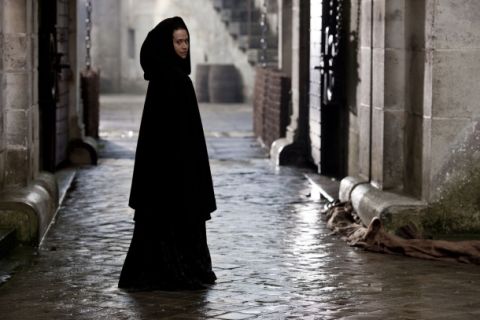 THE ONE WHERE A brainwashed Guinevere makes a couple of attempts on Arthur's life while throwing suspicion on first Tyr Seward then Merlin himself.

VERDICT It's always fun to see old man Emrys come out but this feels in many ways like a by-the-numbers episode of Merlin . The queen's treachery adds an element of intrigue, but individual beats of the story draw on the shows' staple elements - a character's unconscious and only sorcery can save him; characters leap to hasty conclusions and Gaius must caution them to slow down; Morgana schemes outside the walls but takes almost no direct action; characters are wrongly thrown into the cells by a reluctant king who thinks he's obeying the letter of the law; and so on. Swap Gwen for Agravaine and this could have been an episode from last series.

It's also noteworthy that "A Lesson In Vengeance" has the first outwardly comedic scenes so far this series, and I'm torn between welcoming them like an old friend or finding them jarringly out of place. Emrys bantering with the cook is amusing but he's on his way to save his dying friend, isn't he?

The extent of Morgana's influence ebbs and flows at the whim of the plot. Last week Morgana could command the entire Dark Tower, with its nightmare room festooned with rare mandrake roots and an enchanted sword to defend it... this week she has to pay cash in a chemist's shop.

Despite these inconsistencies, we see more great performances from the cast. Angel Coulby's portrayal of Gwen as a remorseless killer, talking softly as she stabs Seward in his cell, and then calmly lying to her friends is wonderful, particularly since she's subverting the stateswoman role she's been cultivating this series - as before, Gwen offers the king her advice, and he accepts her wisdom, but it's to his detriment this time. Meanwhile Colin Morgan is exceptional too - I'm not thinking of the slapstick Emrys moments, but him crying when he thinks Arthur might die. It's moving and shows just how the friendship between Merlin and Arthur continues to deepen.

With Gwen's murderous treachery and some top-notch character moments, this episode ought to feel more significant than it does. Instead there's a sense of Merlin holding out on us. Where is Aithusa? We don't learn anything more about Morgana and her dragon being stuck in a pit for two years. Doesn't Morgana want "vengeance" (the title of the episode) against somebody for that? Where's "Arthur's Bane" that she was hunting so purposefully in episodes one and two? Those important parts of Morgana's plot arc have been teased for the best part of two months now but we're no closer to finding out what it all means.

HERBALISM 101 Three herbs are mentioned in this episode. Gaius calls clary wort a "powerful soporific". It's more commonly known as clary sage (Latin salvia sclarea ) and it's related to mint. It is known to be calming and the essential oil of clary sage is commonly used to treat depression or stress. Then from the apothecary Morgana gets two oils. The first is valerian ( valeriana officinalis ) to send Arthur to sleep; sure enough it's known for its relaxing properties and is still a common ingredient in herbal insomnia pills . Finally Morgana buys henbane . Stay away from this one, kids; hyoscyamus niger is toxic. Despite being used in small doses to flavour beer in the middle ages, and despite chef Antony Worrall Thompson mistakenly recommending it as a salad ingredient, it is known throughout the world as a poison. If he hadn't been sedated, Arthur would have experienced hallucinations and convulsions.

INFLUENCES Killing a king by pouring poison in his ear comes from Shakespeare's Hamlet - it's how Hamlet's father was murdered. Old Shakey referred to the toxin as "hebenon" which might even be henbane (although hemlock and yew are also possible interpretations).

POLICE STATE The Knights Of The Round Table seem to operate like some sort of personal inquisition, invading the home of stable worker Tyr Seward to uncover evidence. And what terrible, circumstantial evidence it is! Just because he has a ball of thread doesn't mean he's the one who committed sabotage; surely Seward and mother always have materials like that in their house - it's their job to mend saddles.

THE TITLE "A Lesson In Vengeance" is a poem by 20th century great Sylvia Plath, which begins "In the dour ages/Of drafty cells and draftier castles,/Of dragons breathing without the frame of fables..."

NITPICK If Arthur was poisoned in his ear (Gaius points out the evidence of tincture there) why does Gwen use Merlin's access to the king's food as proof of his guilt? Nobody claimed he'd eaten anything dodgy, did they?

DRAGON LITE No sign of either Kilgharrah or Aithusa. Showrunners must have spent all the CG budget last week.

OBVIOUS LIE OF THE WEEK Since when was " ... I was just delivering supplies to those most in need!" a believable excuse for popping into town? I'm going to try it next time I'm late home from the pub and see what happens.

SLASH BAIT Very little but surely something can be made of Arthur's plea that Merlin "start showing a little less interest in Guinevere's clothing and a little more interest in mine." We'd suggest a relationship between Merlin and the cook but she's clearly got no time for him: "Keep your grubby hands off my dumplings."

SATIRE AND CRITICISM Radio's The Now Show had an unnecessary dig at Merlin on Friday. Steve Punt, commenting on the recent Newsnight scandal and the resulting management shuffles, said: "Acting director general; acting head of news; acting deputy head of news... at the moment, the only people at the BBC who aren't acting are the cast of Merlin ." Ouch! It's at about 3:15 into the episode .

IT'S WOSSISNAME AND ALSO WOSSISNAME The ill-fated Tyr Seward is played by John Bradley who's now most famous for portraying Samwell Tarly in Game Of Thrones . Greedy apothecary Sindri is played by Tony Guilfoyle who you might remember as Father Larry Duff from Father Ted .

BEST LINE
Arthur: "The cook confirmed your alibi."
Merlin: "Thank you."
Arthur: "I also told them you simply weren't bright enough to organise an assassination attempt."