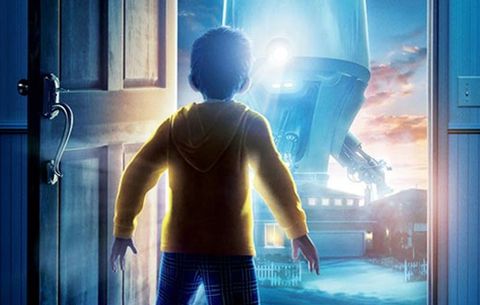 Phew. Happy to report that the worst thing about Mars Needs Moms is the title.

Adapting a picture book by Pulitzer Prize-winner Berkeley Breathed, director Simon Wells conjures a 3D CG kids’ sci-fier that makes up for its lack of originality with a whole lotta love.

After saying something mean to his mother (Joan Cusack), nine-year-old Milo (Seth Green) watches her being abducted by aliens before he can say sorry.

Stowing away on the spaceship, he must save her from a Mars populated by female aliens and Nanny-bots ruled by cruel matriarch The Superior (Mindy Sterling).

These she-Martians live in a world of order, while their menfolk – chimp-like creatures who can’t talk – frolic below in the trash-filled underworld.

Make no mistake, the sci-fi archives are being scooped freely here, with Wells and producer Robert Zemeckis handing us everything from Spielbergian aliens to the wasteland of WALL.E. But the script, written by Wells and wife Wendy, is more heartfelt simplicity than savvy smarts.

Better still, it’s brought vibrantly to life by some Avatar-esque motion-capture magic. Even more than the Tron-style world of light and metal, the rendering of Dan Fogler into a man-child spaceman is remarkable.

He’s a stunningly expressive living being that not once wobbles into the uncanny valley. Oddly, in a movie about “moms”, only Joan Cusack’s character appears to be made out of melted plasticine.

Don’t expect nudges and winks for the grown-ups, but do expect chases, shootouts and pratfalls to keep youngsters happy. Plus, there’s a dramatic end that might scare little viewers into being nicer to their parents…