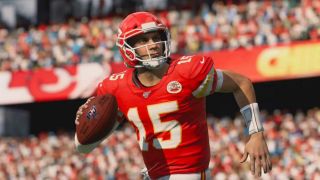 Unlike in previous years, there are no specific game details to report - for instance, last year EA tabbed Tom Brady for 287 yards, two touchdowns, and an interception, while Aaron Donald was predicted to score four sacks. This year, the only additional detail is an MVP award for Patrick Mahomes. Which is hardly the boldest of fortune-telling moves.

However, to supplement the video EA has been sharing predictions from famous NFL players, a couple of whom were eliminated in the last round of the play-offs. Titans QB Ryan Tannehill tips the Chiefs to emerge victorious with a 35-28 scoreline, while team-mate Derrick Henry goes the opposite way: 32-29 Niners is his take. Falcons tight end Austin Hooper makes the boldest call of all: San Francisco claiming the spoils in a wild 56-49 thriller.

While last year's Madden prediction of Rams over Patriots proved incorrect, EA has called 10 of the last 16 matches correctly. Its high point was Super Bowl 54, where it nailed both the correct result and scoreline: New England Patriots 28, Seattle Seahawks 24.

The Super Bowl takes place this Sunday (2nd February) at the Hard Rock Stadium in Miami, with a start time of 23:30 UK/18:30 Atlantic/15:30 Pacific. Wondering how you can watch it for nothing? Then you need GR’s guide on how to watch Super Bowl live stream online for free.