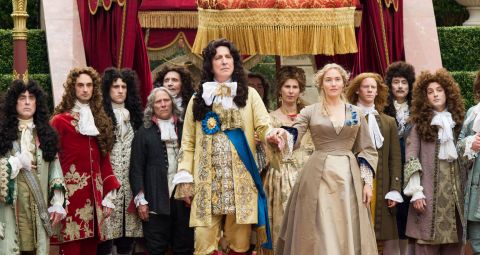 A classy, actorly affair, whose emphasis on bittersweet character drama over class satire is both its most striking feature and biggest missed opportunity.

What attracts an actor to direct? It takes just one scene to discover what Alan Rickman, behind the camera for the first time since 1997’s The Winter Guest and here playing Louis XIV, saw in A Little Chaos. But any thoughts that Rickman the director might bring out new shades in Rickman the actor are dashed; he’s almost self-parodic here.

Louis is not centre stage, either. Instead, the focus is on Sabine De Barra (Kate Winslet), a commoner whose radical notions of gardening beguile the king’s chief landscaper, André Le Nôtre (Matthias Schoenaerts).

Winslet’s aptly grounded demeanour anchors the film and she gets stuck in, sleeves-up and green-fingered, albeit dressed in highly impractical garden wear designed to accentuate her décolletage. Schoenaerts, meanwhile, is enigmatic, Rickman trading on the Belgian star’s relative anonymity to obfuscate his intentions.

Misadventures with a sabotaged sluice gate offer brief action but the real drama comes from Sabine’s hidden past. Yes, there’s a tragic backstory, and the film’s primary arc concerns whether Sabine will allow chaos back into her heart.

While richly enjoyable, there’s the nagging sense that Rickman is enjoying himself too much. The story sets up a collision between Sabine’s outdoorsy spirit and the cloistered world of Louis’ courtiers, kept like “mice in a trap”.

Yet Rickman seems remarkably disinterested in the satirical contours of his class system, preferring a tone of benign cosiness. Perhaps he was too busy honing his eloquence and fearful countenance to kick against the pomposity of pre-Revolutionary France.

A classy, actorly affair, whose emphasis on bittersweet character drama over class satire is both its most striking feature and biggest missed opportunity.