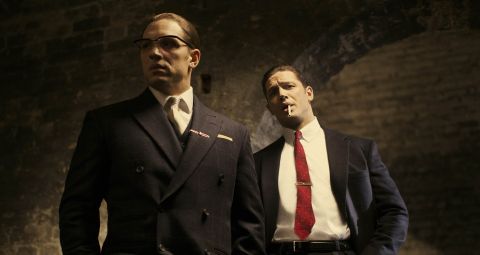 The starrier of this year’s Reggie ’n’ Ron movies (The Rise Of The Krays is the other) deserves your respect. Hardy excels in the dual role, especially as Reggie.

Tom Hardy is double trouble as the Krays…

Frankenstein Meets The Wolf Man. King Kong Vs. Godzilla. Alien Vs. Predator. Filmmakers have always been excited by the clashing of titans, and now more than ever: Marvel regularly pits superheroes against nemeses boasting identikit powers; skyscraper robots tussle cliff-face monsters in Pacific Rim; and the tentpole movie of 2016, Batman V Superman: Dawn Of Justice, promises an epic smackdown.

But it really doesn’t get any bigger, or scarier, than Tom Hardy vs Tom Hardy.

This is the enticing prospect offered by Brian Helgeland’s ogle at the Kray twins’ rule of London’s East End in the 1960s, with Hardy essaying both Reggie and Ronnie in an award-baiting performance. And don’t think the twins just appear at separate times or occupy different halves of the same screen or that one always happens to have his back to the camera; via the magic of digital pokery (to use technical industry jargon), this is a physically integrated, symbiotic relationship.

In one bone-crunching scene, the brothers thump, stamp and headbutt each other with astonishing gusto. By way of comparison, Young Arnie fighting Old Arnie in Terminator Genisys is so much scrap metal.

Based on John Pearson’s exceptional 1972 crime biography The Profession Of Violence: The Rise And Fall Of The Kray Twins, Legend tracks the twins from backstreet scallywags punching above their weight at the local boxing club to rulers of gangland London with police and politicians in their pockets.

Always immaculately suited and booted, the Krays, owners of first a billiard hall and then a West End nightclub, hobnob with the rich and famous and become celebs in their own right. In the shadows behind the spotlight, however, they cement their status by heading up The Firm, a fearsome gang that deals in robbery, murder, arson, torture and protection rackets.

Looking for a way in and perhaps to offer an antidote to all the snarling, beating and killing, writer-director Helgeland, whose best work remains by some distance his script for Curtis Hanson’s LA Confidential, focuses on Reggie’s courtship with local lass Frances Shea (Emily Browning).

Reggie plucks her, aged 16, from under the wing of her domineering mother, and – as you’d expect of ‘The Gangster Prince of the East End’ – noodles her noggin with flash motors, bespoke threads a penchant of waltzing to the best tables at the finest restaurants (even if he does have to sneak into back rooms to sort out business with his bare knuckles).

If that all sounds very GoodFellas, it is, the camera swirling, the champagne popping and the jukebox booming as an intoxicating world unfurls; the gleam and glimmer of Tom Conroy’s faultless period production only adds to the lustre.

“Do you like being a gangster?” asks Frances, both enticed and repulsed. “I like the money and the respect,” replies Reggie, echoing Henry Hill’s patter as he tells of how the neighbourhood kids clamoured to carry his mother’s groceries all the way home: “You know why? Out of respect.”

And if Legend inevitably feels like the low-rent version of Scorsese’s classic, that’s only right – the Swinging ’60s hadn’t quite made it from Carnaby Street to Bethnal Green, and the waft of naffness provides a distinctly British flavour.

But this is Hardy’s gaff and the actor, as Reggie, gives a career-best performance. To borrow another line from GoodFellas, gangsters are movie stars with muscle, which also serves as a neat description of the actor himself and thus allows for a relaxed, charismatic turn free of tricks and tics, shuffles and snuffles. With his swept-back hair, shining eyes and full, sensual lips, Hardy as Reggie is silk and steel, dazzling to behold.

Inevitably, all of the aforementioned tricks, tics, shuffles and snuffles are poured into Ron, larger than life with his ursine gait, gummy grin and tendency to hose spittle whilst roaring rage. Still, it at least means that viewers can tell the twins apart without Ron’s heavy-rimmed glasses, and it fits with the younger brother’s schizophrenia. “He’s off his rocker!” intones one character, somewhat comically.

It’s for this reason, rather than an admirably courageous decision to come out, that Ronnie responds to the promise of an American gangster (Chazz Palminteri) to get him a Philadelphian girl with, “I prefer boys. Italians. Sometimes Greek. I’m not prejudiced.”

With other key characters played by such cream-of-British thesps as David Thewlis, Paul Bettany (a nod to Gangster No. 1?), Taron Egerton, Paul Anderson and, as Nipper Read, the detective tasked with taking the Krays down, Christopher Eccleston, this is a heavyweight biopic.

It’s flawed, yes – Frances is frustratingly underwritten, her psychological fault lines spoken of but never shown – but it’s also swaggeringly cinematic. And it has Tom Hardy vs Tom Hardy...

The starrier of this year’s Reggie ’n’ Ron movies (The Rise Of The Krays is the other) deserves your respect. Hardy excels in the dual role, especially as Reggie.