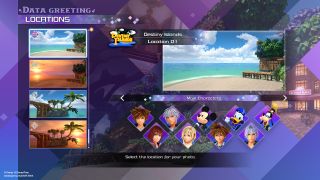 Kingdom Hearts 3 : ReMind DLC release will include a "Data Greeting" feature that enables you to create your own customs photos in-game. You'll be able to place all sorts of objects down for your photos as well as place characters anywhere you like and choose their poses and expressions.

The new photo mode feature coming to the DLC was detailed in a series of tweets posts on the Kingdom Hearts 3 official Twitter account. In the images posted in the tweet, you can see that you're able to choose from a selection of locations to set your photos, and you can see some of the "objects" you can place, with a menu of different Dream Eater creatures to select.

Introducing the Data Greeting feature in the #KingdomHearts III Re Mind DLC!You'll be able to place objects and characters (and change their poses & expressions!) to create your own custom photos.The possibilities are almost limitless - we're looking forward to seeing yours! pic.twitter.com/Gyihyb8DtOJanuary 20, 2020

From the looks of it, you'll be able to place up to 25 objects and 25 characters in your photo set-ups and use different filters and effects to give your pictures that finishing touch. The image only shows the main characters, but it looks like more may be able to feature in the photos.

As well as giving us more information about the Data Greeting mode, the account also gave us more details about some of the other exciting features included. ReMind also introduces a new Premium Menu that you'll be able to use to custom the difficulty of your game, as explained in a tweet from Square Enix: "We've added codes to make the game either easier or harder, and included a number of challenges for you to take on… good luck!"

Most exciting of all, a free update is coming to Kingdom Hearts 3 ahead of the ReMind release will add a new Double Form that will once again allow Sora to dual-wield Keyblades. The ReMind DLC is set to release on PS4 on January 23, 2020, with the release on Xbox One due to release a month later on February 25, 2020.

Outside of these new features, new story content and boss battles will also be coming to Kingdom Hearts 3, so there'll be plenty of reasons to reunite with Sora and the gang very shortly. Photo modes are always a fun little touch in game worlds and the amount of options the Data Greetings feature appears to give you looks set to give Kingdom Hearts fans the opportunity to create all kinds of picture perfect moments.

Here is are all of the best upcoming games for 2020 (and beyond).