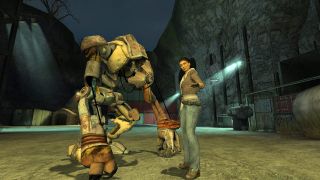 Dr Judith Mossman has folded her arms in disapproval across her turtleneck sweater, presumably the most uptight item of clothing she could find in Black Mesa East. "The zero point energy manipulator is not a toy, Alyx."

The eye-roll Alyx Vance offers in response fully justifies Valve's years of research into facial animation. "C'mon Gordon," she says. "Let's get out of here."

Within minutes, you're using a priceless prototype built by physicists from Harvard to shoot hoops and play catch. Game developers often talk about 'finding the fun', and Alyx is the embodiment of that process. When she looked at the zero point energy manipulator, she instead saw the gravity gun. Who better to lead Valve's campaign to punch through the complexity of VR?

It's easy to forget now that Half-Life 2 sold the gaming world on physics. It taught us how to have fun with an emerging technology, rather than simply marvelling at proof-of-concept demos.

Projectiles, cover, basic navigation: nothing was the same when exposed to the wibbly-wobby rules of the real world. It was down to the Half-Life 2 team to teach that new ruleset during the course of the game - and crucially, do it with style.

Valve's genius was in realising that a tutorial wasn't an awkward phase to hurry the player through in the first half an hour. Rather it was precisely where the joy was found. The studio defined game design as a lesson: one that trains a player in new mechanics before giving them opportunities to show off their new prowess.

Think of the headcrab zombie, one of Half-Life 2's most dedicated tutors. When a shambler first knocks a barrel toward you, it's not particularly painful, but it's a shock – bracing enough to teach you that physics objects cause damage at speed, and can thus be used as weapons. A little later, when you find a circular saw pinning a zombie's top half to a wall, you learn sharp physics objects can be used for dismemberment. Finally, in the tight landings and staircases of Ravenholm, Valve grants you a chance to show off your new understanding: lining up zombies in a row just so you can cut them all down.

In short, Valve thrives when it has something to teach us. And even now, six years after Facebook's Oculus acquisition, most of us still need training in VR. This is a technology that has been emerging for decades, yet still bobs somewhere just beneath the surface of the mainstream. It requires gentle introduction, and nobody knows how to do that better than the studio that ushered Newtonian mechanics into the FPS genre.

After the launch of the Vive in 2016, it was clear that not many big studios had invested heavily in VR, and those that had soon regretted it. CCP, the developer behind Eve: Valkyrie, shut down its two VR divisions in 2017. Half-Life: Alyx, then, is built specifically to address a void in the VR market – the missing triple-A production that elevates the form above short experiments.

There's a strong argument to be made that it arrives too late. Oculus shipped only 354,000 Rifts in 2018, according to SuperData estimates, and Valve's own Index VR Kit, which lauches with Half-Life: Alyx, is a niche prospect at £919. But Valve, with its vault of Steam cash, can afford to be farsighted.

"There are many reasons why it was and still is hard to justify building something of that scope in VR," Robin Walker told Geoff Keighley. "We felt like that was a role we could fill, because we can certainly invest in longer-term strategies – putting more effort, money and time into something we may expect to return."

That relationship is symbiotic. As much as Valve is saving VR, the medium is saving Valve from Half-Life 3. This is a studio at which, we're told, staff pick their own projects. Who in their right mind would choose to embrace the insurmountable pressure of a sequel to the most acclaimed shooter of all time?

"If we had set out this time to make Half-Life 3, the vast blank slate would have been much harder to fill in," designer Greg Coomer tells me. "New tools provide obvious new possibilities, but they are also useful to us as designers because they provide constraints. Making a Half-Life game that is VR-native actually makes the process of figuring out what to build more straightforward in some ways, not less."

Just as the gravity gun focused Valve's innovations, new technology has had a regenerative effect on Half-Life in 2020 – its story, combat, puzzles, exploration, tactile interaction and environmental vistas. All have been enhanced or reinvented by VR, say Valve.

Like the zero point energy manipulator, VR can sometimes seem like a fiddly invention for use only by the experts. If there's anything Alyx Vance knows, though, it's how to turn a tool into a toy.