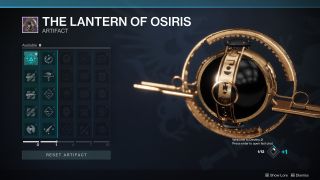 If you, like me, were stuck wondering how to get the Lantern of Osiris Artifact in Destiny 2: Season of Dawn, I've got good news. It's easy to get and you can unlock it very quickly - like, in an hour. All you need to do is finish A Matter of Time, the intro questline for the season and the Sundial.

Speak to Osiris in the new Sundial area of Mercury, which is accessed from the Destination map. He'll tell you to repair an Obelisk in the Tangled Shore. To do so, you'll need to kill Cabal in the Tangled Shore, which can be found in the northern portion of the map by Sorik's Cut. You'll earn more progress if you get kills with Solar weapons.

Head back to the Obelisk in Thieves' Landing to advance the quest. Next, you'll need to collect Light charges by getting Super and ability kills in the Tangled Shore. You can use any subclass to do this, but the bulk of your kills will come from your Super, so use a subclass with a powerful roaming Super. I was able to finish this step with one Super as a top-tree Stormcaller Warlock by completing a Lost Sector near the Obelisk. Hunters could use Arc Staff or Spectral Blades, and Titans should use bottom-tree Fists of Havoc.

To finish the quest and finalize the Obelisk, you'll need to complete the Sundial, the new six-player matchmade activity on Mercury. It's a pretty straight-forward horde mode with a few rooms of baddies and a boss fight. Much like the Menagerie, you have to complete rooms to earn progress and unlock the boss. The rooms generally revolve around collecting, throwing, and/or transporting elemental orbs, and then killing big dudes. The final boss is similarly clear-cut. Melee the bubble Psions that spawn in to drop his shield, and shoot the glowing portions of the cages he summons to destroy them. Repeat until dead.

Speak to Osiris once more to finish the quest and claim the Lantern of Osiris. All those Sundial Champions shouldn't give you much trouble now.

Those Artifact mods will go nicely with this season's Solar subclass changes.