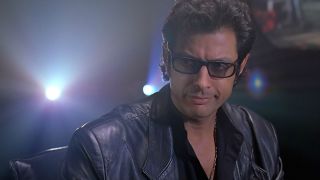 The 'blum is back in Jurassic World 2, baby, and he's "saucy" and "sassy" as ever. Entertainment Weekly asked Jeff Goldblum about his recently revealed casting in Jurassic World 2, and the actor confirmed that he is looking forward to his return as dinosaur doomsayer Dr. Ian Malcolm. He did so in the wonderfully idiosyncratic manner that can only be described as Goldblumian.

"Off I go in a few weeks to London, where they’ve been hard at work, and I’ll try to contribute something to the plate of dino-entertainment," Goldblum began. "I like my character. I think my character is a saucy, sassy man of some integrity and deep thinking. And of course, that whole world continues to be popular, slam-bang, top entertainment."

Goldblum said he's already spoken with Jurassic World 2 director J.A. Bayona about some of the movie's themes, which will extend beyond mankind's boundless capacity to create, then underestimate, then be eaten by giant death lizards.

"Even though some might say it’s popcorn-y entertainment (top-notch, of course), in our conversation he was very focused on the serious issues of greed as it oftentimes comes up in those movies, and the marvels of science and reason and the very fascinating point at which our species finds itself both in real life and in this imaginary world too. I’m very interested in that myself, so I’m looking forward to this. I’ve got a few things to do. I’m nothing if not conscientious, so I’m enjoying working on it every day."

If you want to heap some more morsels onto your plate of dino-entertainment, check out all the secrets hiding in plain sight in Jurassic World 2's first official photo.