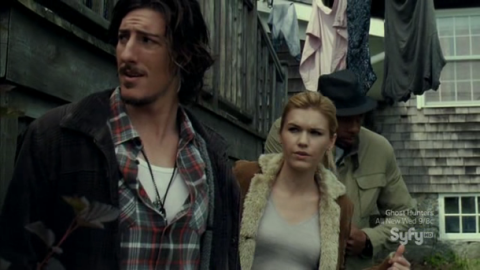 THE ONE WHERE Audrey tries to find a way of resurrecting Nathan, and Tommy is outed as The Bolt Gun Killer.

VERDICT A strong conclusion to the two-part story, “Magic Hour Part 2” is nevertheless very different in tone. The first part was strong on character; this second part is mainly plot, action and tension.

Three cheers for Audrey for the first thing she says this week: exactly what we were all saying a week ago after the cliffhanger: “Get the resurrection girl!” A rare case of the TV characters not being terminally dim for the sake of a bit of drama. Duke, meanwhile, is too busy giving Tommy a suspicious stare. Although he hasn’t made the Bolt Gun Killer connection yet, he clearly notices that Tommy is acting a bit odd for a trained cop in a situation like this. As in, not acting at all. Just standing there, frozen like a complete prawn.

Duke’s suspicions, however, fail to raise a great big warning flag a few moments later when Tommy argues that they shouldn’t let anybody know that Nathan is dead, because, if they resurrect him, “That would be hard to explain.” HELLO?! This is Haven !? The dead walking again is small beer in this town. After all that’s happened to the place in the past three seasons there can’t be anybody left in town who doesn’t know about the Troubles, surely?

Though, apparently, yeah. Because the town still needs Dwight the Fixer. Ah well. Let’s just drive around with Nathan in the boot instead. Nothing creepy about that.

The show wrings some great tension out of the early scenes where we, in the audience, know that Tommy is eeevvvviiilllllll!!!!! but the regular cast doesn’t. The moment when he spots the blood on the cellar steps and goes, “I’ll check down here, you go upstairs,” has screaming at the screen, “NO! Audrey! Don’t let him!” On the other hand, you don’t really think he’s going to kill Noelle, because, hey, we know Nathan’s got to be resurrected, right?

But then Tommy kills Noelle. Bummer.

Audrey quickly switches to plan B. Ah, so this is why there have been so many mentions of The Troubles running in families this season. Audrey is going to activate Moira’s Trouble by sensitively throwing her dead sister’s body at her feet. Problem. Moira has a heart of stone and the compassion of a Republican. No Trouble triggered here. It’s a great dramatic contrivance, especially coupled with the ticking clock (Nathan must be resurrected before sundown) and he writers milk it for all the magnificent melodrama they can squeeze out of it.

Admittedly, the final resolution hinges on a slightly hokey twist, and the tears and reconciliation scenes drag on a wee bit too long, but a marvelous, passionate performance from guest star Claudia Black (Moira) goes a long way to papering over some of the dopier dialogue. And the show’s main leads give their usual masterclass in making so much tosh look a great deal classier. (But anyone else think it’s odd that Jordan can watch Audrey tearily profess her eternal love for Nathan, but apparently dismiss it ever happened by the next scene?)

Meanwhile Tommy is off torturing Vince and Dave in some scenes that look uncomfortably inspired by Misery . It’s pretty clear that Tommy – or someone imitating Tommy – isn’t dead at the end of the episode (“They never found his body!” Dum dum dummmmmmmm…!). Who else reckons his Trouble has a shape-shifting element of some sort? So, even though we’ll definitely be seeing the Bolt Gun Killer again, it’s unlikely we’ll be seeing him in Tommy form again. Which is a crying shame, because Dorian Missick as Tommy was a fun addition to the Haven formula.

“Magic Hour” has been a massive success for Haven , and hopefully will provide a blueprint for the future of the show.

HASHTAG SPOTTING It’s a bit tricky to spot this week but it’s on the side of Vince and Dave’s fishing hut.

GUARDS INK Blimey, what a whopper! Does the size of Dwight’s Guards tattoo indicate some sort of seniority within the organisation?

NOT THE FIGHT STUFF The fight between Duke and Tommy is terrible. It looks dodgy enough in these grabs; it’s even worse when you see the moving version. Not only is it unconvincingly staged, it’s also badly edited – you don’t even realise Duke has swung an axe at Tommy until about two cuts later; similarly the moment where Duke grabs Tommy’s (other) gun is a blink-and-you’ll miss it moment. When Jordan arrives, the whole business of shoving and fumbling that leads to Tommy escaping is near pantomime. What’s went wrong guys? Stunt arranger have a day off?

BARN FREE Hang on? Is that the mysterious, vanishing memory-erasing barn that the other Audrey fell foul of in season two? In which case, either the barn’s grown, or the island’s shrunk, or it’s a different island, or it’s just a metaphor for something.

BEST LINES
The scene with Audrey revealing Nathan’s body in the boot of the car to Jordan is played like a bizarre, understated black comedy. We’re not sure if it was supposed to be funny, but the flat “just the facts, ma’am” delivery amused us…

Jordan: “Who did this?”
Audrey: “He’ll pay. But first we need to bring Nathan back.”
Jordan: “You can do that?”
Audrey: “There’s a resurrection Trouble. If the person touches him before sunset then he’ll come back when the sun goes down.”
Jordan: “Then what are you waiting for?”
Audrey: “The woman who has it is right there. Her sister is inside but her Trouble isn’t active yet. We have to trigger it.”
Jordan: “It usually takes some kind of emotional trauma to do that. What are you going to do?”
Audrey: “Traumatise her.”