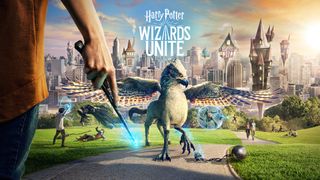 Now we know finally how to download Harry Potter: Wizards Unite, many of you might be wondering whether it's the game that'll finally make you feel like a real witch or wizard instead of a dull old muggle. Well, wonder no more: the free-to-play mobile wizarding simulator is the brainchild of WB Games and Niantic, yet it's no carbon copy of the latter's phenomenally successful other game, Pokemon Go.

What is spell energy, and why should I care about it?

Spell energy sounds self explanatory, but let me walk you through it anyway: you use this resource to cast spells (surprise surprise). As much of your time in Wizards Unite is spent casting spells to get rid of Confoundables (evil beasties like death eaters, dark wizards, and werewolves) to free the Foundable they're imprisoning (magical objects that have made their way into the muggle world), spell energy is a pretty big deal. Think of it as being Wizards Unite's equivalent of Poke Balls. One spell requires one unit of spell energy, so it doesn't take long to run out.

You get one unit of energy for each bit of food that you'll find at inns, which are kind of like Wizards Unite's version of PokeStops. The big difference between the two games is that in Pokemon Go you can get two to three Poke Balls per spin of a PokeStop, meaning that it's easy to stock up on Poke Balls without worrying about running out. However, in Harry Potter: Wizards Unite you only get one unit of spell energy per inn visit, with low level wizards and witches having a maximum amount of 75 spell energy. So at lower levels you'll have to visit 75 inns – or repeat the same ones during you walking route (they reset every 5 minutes) – to fill up on spell energy. As each spell costs one spell energy to cast, and you'll probably have to give it a couple of tries before you eliminate a Confoundable, it doesn't take long to run out of spell energy completely.

Picking your Hogwarts House is purely a cosmetic thing in Harry Potter: Wizards Unite, and that hurts

The problem is – and this is one of only a few things wrong with Wizards Unite at the moment, as I say in my earlier preview of the game – that once you run out of spell energy, you can't fight at all. Of course, as long as you have an inn nearby you can just visit them to regenerate it. Having to walk around is one of the fundamental pillars of the game, so it's not particularly shocking that Niantic and WB Games has put a system like this in the game, but if you happen to live somewhere rural – where you will, naturally, find fewer inns – you might find yourself a bit stuck.

Unlike Poke Balls, you can't stack up food to consume at your leisure either, as you eat it immediately upon finding some. Being able to store food in your inventory to eat when you need a bump of spell energy, or having spell energy slowly regenerate over a couple of hours (which has already been suggested on Reddit), would mean that you don't have to go hunting down an inn every time you run out of the all important resource. But, as it stands, once your spell energy hits zero a prompt will pop up asking you if you want to spend 100 gold to get 50 spell energy... Uh oh.

Gold is the microtransaction currency used in Wizards Unite, but don't get alarmed just yet, as you don't have to pay for it. After playing for a couple of hours, I had 115 gold glittering in my vault as you can also get it from completing assignments and levelling up. As long as you're prepared to grind, you'll still have some gold to spend, even if it's not as much as Harry Potter has stowed away his Gringotts bank vault. Gold is also used for much more than spell energy: spend it to finish brewing a potion immediately instead of waiting for a couple of hours, or to get missing ingredients for a potion if you can't find the correct herbs near you. Similarly to Assassin's Creed Odyssey's time savers, gold can help speed things up if you're impatient… and have a pile of it burning a hole in your pocket.

However, as it stands today, the implementation of spell energy is one of the only things holding Wizards Unite back. As annoying as it was to run out of it, when I did have enough stored I found that tracing spells with my finger was a thoroughly entertaining test of accuracy and speed, meaning that it does take actual skill to dispel the Confoundables lurking around the world. Hermione would be so proud.

Hunting for ingredients is similarly rewarding as you use them to craft potions at greenhouses, so if you're anything like me and spent your time writing detailed lists of everything you needed to collect in games like Stardew Valley, Wizards Unite has plenty to make you feel like a true witch or wizard. It's out on June 21, so get those wands ready and prepare to work as hard as you would for your O.W.L.S. to get that gold, and remember to use that spell energy wisely…