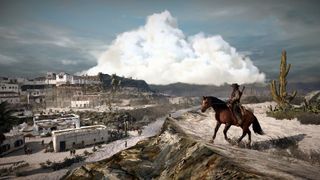 The new year is here, and though this is bound to be an exciting one filled with huge games, new consoles, and who knows what else, we can't help but feel a bit nostalgic. 2010 was an amazing year for video games; it saw the launch of some truly juggernaut franchises that are still with us to this day and featured more than a few sequels to series that have long since been dormant.

With that in mind, we picked out 10 games which will celebrate their 10th anniversary in 2020. GamesRadar+ has looked at how they fared at release, what's happened since, and where each franchise might go next.

Then: BioWare's much anticipated follow-up to its once Microsoft-exclusive space RPG was an instant hit, building on a solid foundation and expanding the possibilities with some welcomed polish and loyalty missions that made a real difference in making you question whether or not Commander Shepard was capable of saving the day. However you decided to play it, you probably remember every twist, turn, and character death in your version of the player-driven space opera.

Since: The finale to Shepard's trilogy is famously remembered for a set of very different reasons to its predecessor. Mass Effect 3's controversial ending became the most talked about topic in gaming when the series concluded in 2012, thanks in large part to what many fans considered an abandonment of the game's core promise of catering each player's specific story with their own bespoke conclusion.  It took several years before BioWare would release something new with the series' title on its box but, after Mass Effect Andromeda, many would now have preferred they hadn't even bothered.

Next: With BioWare having lost many of the core talent behind Mass Effect over the years (though key contributor Casey Hudson has since returned as the studio's general manager), it's unknown whether the studio will revisit the series again. We expect it will, but with teams separated between Dragon Age 4 and keeping Anthem on life support, we're not sure who's left to outline the game to restore the series to its former glory. Where do you go from Commander Shepard staring down the greatest existential threat to the universe, and winning? Perhaps bringing the world down to a different level, where the fate of the universe isn't at stake, could represent exactly the sort of restraint the series needs.

Then: Black Ops launched in the year following Modern Warfare 2, which was no easy act to follow. Activision's series was truly at the height of its powers back then, long before major contenders like battle royale and hero shooters arrived to steal a significant portion of the multiplayer pie. Nevertheless, Black Ops became the best-selling game of 2010, and is still cited as the best campaign, if not the best Call of Duty game, in the entire series.

Since: Black Ops became as long a sub-series within Call of Duty as the blockbuster Modern Warfare, spawning three more sequels from Treyarch. The series no longer maintains the critical luster the original had, though, and what's actually been on offer has varied greatly from game to game. Black Ops 2 mixed the past with the future in a way not all fans appreciated, while its follow up featured a campaign so unhinged that it threatened to derail the overarching series narrative entirely.

Black Ops 4, meanwhile, dropped the campaign altogether and in its place capitalized on the battle royale craze that took off with PUBG and Fortnite. Blackout turned out to be a huge hit, though the rumors of a standalone version have not become a reality as of yet. Despite the many facelifts for Black Ops over its four installments, the series has never been less than one of the best-selling games each and every year without fail.

Next: On the usual release schedule, which rotates three different developers around work on each annual release, Treyarch would be due in 2021 with their next game in the series but, according to a Kotaku report, 2020's Call of Duty, led by Sledgehammer and Raven as co-developers, was scrapped after some development problems and Treyarch has been left to pick up the pieces.  Rumour has it that the studio will be making Black Ops 5 with the surviving assets from Sledgehammer and Raven's cancelled project.

Will another Black Ops capture the attention of fans? Call of Duty has long seemed future-proofed, as if nothing could provoke a sharp downturn in sales and playtime statistics at this point in its lifespan. We expect Black Ops 5, if it's real, may not be what some fans want to see next, but we also expect it won't really matter when Activision calculates the bottom line.

Then: New Vegas was propositioned as the in-between sequel from Obsidian before Bethesda Game Studios' eventual release of Fallout 4 in 2015. Sporting a western theme, the RPG didn't sell quite as well as its series brethren, but was still a critical hit, and only seems to have aged with grace in the years since.. Its cohesive weaving of several plot threads arguably made for a best-in-series story that grants players tremendous agency in how their adventures conclude.

Since: Fallout and Obsidian have gone in starkly different directions since 2010. Fallout 4 took home a number of Game of the Year awards in 2015, but is considered something of a polarizing entry amongst the franchise faithful, with many arguing that the game didn't do enough to stand out from its predecessor.

Bethesda soon followed up with the critically panned Fallout 76, which launched in an astonishingly buggy state in 2018 and, despite myriad hotfixes and regular content drops, has struggled to wipe the slate clean after many players swore the game off over a year ago. Obsidian, meanwhile, went on to create a number of hit projects, including South Park: The Stick of Truth, Pillars of Eternity and, more recently, The Outer Worlds, which itself has accrued its own impressive collection of Game of the Year awards for 2019. The Outer Worlds is very much a Fallout-like RPG, though, with the right dash of Mass Effect cooked into it as well, it's been nothing short of a favorite among journalists and players alike.

Next: Looking ahead, there's no doubt Fallout and Obsidian will continue working in different directions. For the former, we may not see a new Fallout for many years, as Bethesda has already revealed that space adventure Starfield is its next RPG epic, before The Elder Scrolls 6 arrives on the scene following that. With that in mind, it certainly seems as though Fallout will be on the back burner for at least half a decade, if not more, using typical development cycles as a rough measure.

Obsidian certainly won't be making that next Fallout either, with the studio having been bought by Microsoft last December and now sitting under a suddenly crowded Xbox Game Studios umbrella. It's likely we'll see a new Outer Worlds, though, which should still scratch that same itch for genre fans.

Then: As one of the most successful developers in the world, Rockstar probably had carte blanche from parent company Take Two to make their next game after hits like Bully and Grand Theft Auto 4, and decided to go out on a limb to make the western work for video games. It's ancient history now, but at the time, many were skeptical that westerns translated well to the interactive format. The studio proved them wrong with one of the best-selling and most critically acclaimed games of all time.

Since: Few could hardly forget the long-awaited follow-up to 2010's cowboy epic with 2018's Red Dead Redemption 2. Despite its title, RDR2 is a full prequel, delving further into the background of the Dutch van der Linde gang, and its titular leader. Swapping out beloved protagonist John Marston for the once unheard of Arthur Morgan was a curious choice pre-launch, but most players fell hard for the character's dramatic 80-hour arc.

Despite splitting virtually all the various Game of the Year awards with God of War, some players complained of Red Dead Redemption 2's leisurely pace. By design, the game demands players to forego most fast travel, to walk through their allies' campgrounds, and to awkwardly maneuver horses that just love to catapult you over rocks. Rockstar certainly had a vision, and stuck to it, even if it meant some players frustratingly galloped about more than they wanted to.

Next: Narratively speaking, we probably don't need to see any more of Dutch's crew. The story in RDR2 wrapped it up nicely, leaving little room for more adventures with them. Could we see another western from Rockstar? It seems possible, but fans have long clamored for other projects like a Bully sequel or confirmation that Agent, once envisioned for PS3, is never going to happen. It's most likely that GTA 6 is next up on Rockstar's to-do list, but the studio is also probably in pre-production (at last) on a second project. Our money would be on Bully 2, but maybe one day Rockstar will show us again how the west was won.

Then: Long before Remedy was winning GamesRadar's Game of the Year award for 2019's Control, there was Alan Wake, a Lynchian thriller set in the Pacific Northwest where the logging town of Bright Falls hosts all sorts of supernatural evils. Alan Wake earned good to great review scores, but its sales were hampered by a certain aforementioned cowboy game (see above) launching on the same day.

Since: Launching as an Xbox 360 exclusive, Alan Wake enjoyed cult status as an underplayed gem for years. It spawned one spinoff for XBLA in 2012, Alan Wake's American Nightmare, which continued the story in small but meaningful ways, but it still wasn't the proper sequel so many fans still beg for even today. Remedy can hardly make a game announcement without at least a dozen questions about Alan Wake 2. There have been rumors and even a few abandoned prototypes for a proper Alan Wake sequel, but as we enter 2020, there's no sign of anything concrete… yet.

Next: Remedy's 2019 effort, Control, sets up some really interesting ideas for the studio's games going forward. But that's all we'll say in this space. If you don't mind the spoilers, read more here. What's next for Alan Wake may go beyond just video games too, as it's been announced that Sam Lake, Remedy's creative director, is actively working on adapting the story into a TV series. We've not heard much on it lately, and one must always consider the spotty history of video games that try to transition to other formats, but for now it's okay to be cautiously optimistic. Alan Wake the video game mimics so much of the new Golden Age of TV format with its episodic delivery, cliffhangers, and countless mysteries, so it should be a natural fit for some streaming service someday should the project ever make it to the finish line…