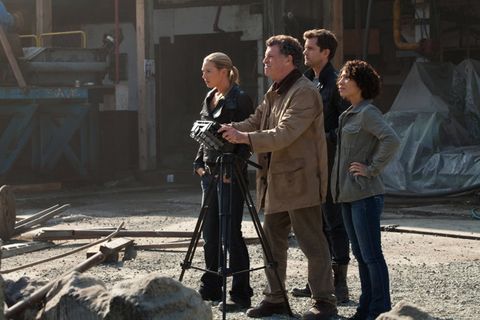 THE ONE WHERE Peter uses his new skills to track the movements of the Observers, using old Fringe tech to melt their faces. Meanwhile, Walter's latest Betamax tape instructs the Fringe team to recover a pair of Observer "beacons" from an old laboratory – a job that'll require help from Nina Sharp.

VERDICT Another cracking episode that leaves plenty for fans of the show's ongoing mythology to chew on. While last week's outing made Peter out to be a superhero, now we're starting to see the down sides of having Observer tech in your body, with the master/servant dynamic between Peter and his implant starting to shift in a big way. No wonder Olivia's so worried when she realises what he's done. Those two don't get a break, do they?

Joshua Jackson puts in a brilliant performance, gradually ramping up the Baldie tics and mannerisms throughout the episode, until by the end he's more Observer than Peter. There was loads of fan speculation when Peter went AWOL at the end of season three that he might return as an Observer – it's taken a couple of years, but now it's finally come true. Maybe Fringe 's writers have taken inspiration from the bloggers?

As has happened frequently in season five, the "mission" element of the episode is way less important than the character beats. Here that means plenty of quality time devoted to Walter and Nina, and their relationship with William Bell. Walter's fears that he's turning back into a man he doesn't want to be manifest themselves once more, with the occasional flashes of arrogance, anger and cruelty suggesting that his concerns could be justified. Surely Nina won't agree to his request to remove those bits of his brain, though – the fate of the world is at stake!

Blair Brown's Nina, meanwhile, gets as much quality screen time as she's had in the previous four seasons combined. Where she's traditionally been a rather undeveloped background figure, with slightly ambiguous, murky motives, here she's a human being with proper emotions. You really feel her hurt when Walter tells her William Bell never loved her, so it's quite a relief when Walter presents her with the photo that resided in Bell's safe.

Indeed, it feels like the writers are trying to give closure to all the major players, so hopefully that means we'll belatedly see some proper time devoted to Astrid in the six episodes to come – with the notable exception of season four episode " Making Angels ", she's been short-changed for four and a half years, and deserves better.

PETER As Bishop Jr becomes more and more affected by his Observer tech, it's becoming increasingly clear why the writers chose to name the episode where he implanted himself " An Origin Story " – it's where Peter 2.0 begins. Here we see a bit more of his view of the world – that grid pattern superimposed on everything could get annoying after a while – and learn that he can hear the Observers' voices in his head. It's rather like being plugged into the Borg, or the Matrix. We have to say, though, that when we suggested last week that Peter might start going bald, tongue was embedded deep in cheek, so it's quite a surprise to see him pulling out a clump of hair here.

Also, did anyone else spot the parallels between Peter's ruthless stalking and killing of Observers, and his pursuit of the shapeshifters in season three?

ETTA LIVES ON Those "Resist" posters featuring Etta (below) are fast becoming the new Observer sightings. Love the way Peter gives a wry smile when he sees them on the wall, though – some of his humanity remains.

WHAT'S IN A NAME Walter's name for Astrid this week is Agnes.

NITPICK It's really annoying that Blair Brown is mentioned as a "Special appearance by..." credit at the beginning at the start of the episode. A good way to ruin the surprise of Nina's first appearance of the season!

SPECULATION William Bell: what a bastard, eh? He's done some dastardly things in the past, but working with the Observers and betraying the whereabouts of the Fringe team to the baldies? That's a pretty low blow – no wonder Walter didn't think twice about cutting off his hand in " Letters Of Transit ".

But what went on between Walter and Bell before the Observers invasion? September came to Walter in " Brave New World: Part Two " and warned him, "We have to warn the others. They are coming," so presumably Walter took that information to Bell. But last thing we knew, Bell had used his dimension-hopping technology to evade capture after his crazy world-ending scheme had been foiled, with whereabouts currently unknown. So how did Walter make contact? What prompted Bell to join forces with the Observers, and sell out Walter and co? And does the fact that the beacons are still buried in the lab mean that Bell had second thoughts about working with the Baldies?

DID YOU SPOT? There's a kid with a loyalist tattoo on his face (see below). Did his parents sign him up? It's a little early to be committing him to a lifetime of servitude, don't you think? Remember kids, a tattoo is forever...

STAR TECH The tech that Peter uses to melt the Observers' faces (below) made its first appearance way back in Fringe 's pilot episode, killing the passengers on Flight 627.

TRIVIA Kelvin Genetics, the buried lab the Fringe team break into, has been mentioned before – in season one episode "Unleashed" (1.16), Walter reveals that he did experiments to create his own species while working there with William Bell. Of course, Kelvin is a mainstay of Bad Robot productions: the USS Kelvin is George Kirk's ship at the beginning of Star Trek , the petrol station in Super 8 is called Kelvin Gasoline, there's a Kelvin Inman in Lost and there's a letter addressed to an "H Kelvin" in Mission: Impossible III . Kelvin was the surname of Fringe co-creator JJ Abrams' maternal grandfather.

BEST LINE
Walter: "Belly, you monster."
Peter: "What is it, Walter?"
Walter: "My Bowie, he stole it. It's not enough me that he institutionalised me and betrayed our friendship, but he pilfered my record collection as well."
Richard Edwards