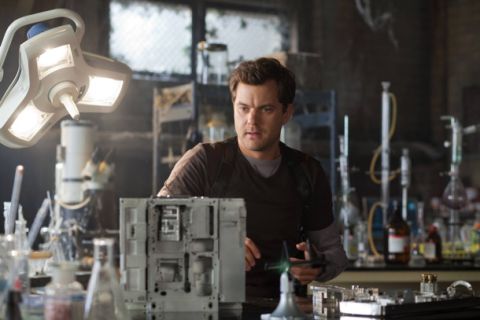 THE ONE WHERE The resistance asks the Fringe team for help deciphering an Observer's notebook that could hold vital information about the transport of atmospheric reprocessing equipment from the future. Peter, however, sees it as an opportunity to take the fight to the Observers – and takes advantage of the chance to interrogate a captive baldie in a captivating game of information poker.

VERDICT After the heartbreaking events of " The Bullet That Saved The World ", this was never likely to be an episode packed with joy and laughter. But while "An Origin Story" is almost relentlessly downbeat – not even Walter gets to say anything particularly funny – it's also powerful and emotional stuff.

The plot about the Observers bringing humanity-threatening equipment through a portal from the future is really just a red-herring, a MacGuffin that provides the backdrop for a human story to unfold. Indeed, whether or not Peter and Walter's plan to create a black hole in the Observers' future succeeds is almost irrelevant – this might even be the last time we hear about such things, so inconsequential is the portal to the overall plot.

While this isn't Fringe 's most exciting hour from a sci-fi point of view, in character terms the show's never been better, with each of the three leads given plenty to sink their teeth into.

Peter is arguably the focus of the episode, and the aftershocks of losing Etta are taking him off in intriguing – and not entirely healthy – directions. He's behaving like a man who's prepared to do anything to have his vengeance on the Observers, and that's made him thoroughly unpredictable. There's something uncharacteristically sadistic about the way he tortures the captive slaphead, while his decision to plug himself into Observer tech is not the behaviour of a rational man. (That said, I can't wait to see where this new development takes the show.)

While Peter is on the warpath, Olivia's trying hard to keep it all together. It's a side of the usually stoical agent we've barely seen before – aside from her ordeal "Over There" in season three – but as always, Anna Torv is more than equal to whatever the writers throw at her. Her face conveys much more than words ever could, as you see the realisation in her eyes that she could lose Peter as well as her daughter. Meanwhile, the scene where she watches Walter's Betamax of Etta as a toddler brings a tear to your eye.

Unusually, it's Walter who's the voice of calm. His conversation with Olivia about the aforementioned video and the importance of her and Peter being there for one another is one of the best played scenes you'll see on TV this year, in sci-fi or elsewhere. He displays an awareness of what's going on that's usually beyond him – of course, he really does understand what Olivia and Peter are going through in a way few others could, having seen first hand what grief can do to a family. Still, it's wonderful that a character we've known for all this time still has the capacity to surprise – when Fringe is done and dusted, Walter Bishop will go down as one of sci-fi's all time greats.

OBSERVING THE OBSERVERS Once upon a time we were happy with just an occasional sighting of one of the baldies. These days we need a little something more – and this episode gives us some extra facts about their physiology. Like the molecules in their blood that prevent damage to their vital organs – presumably from our poisonous atmosphere. Or the compounds they have that act as natural antifreeze to keep them tethered to a particular location – er, we don't understand that one. Whatever it means, it's made very clear that this particular breed of human 2.0 is the result of technological advance rather than natural evolution. (They still haven't explained the Observers' lack of hair and their penchant for trilbies, however.)

ETTA LIVES ON It's a beautiful touch when Olivia sees a wall of posters featuring Etta's face and the simple tagline "Resist". It's touching that she should become the face of the resistance, and a neat echo of Peter's remark that, "I want everyone to know that Etta is responsible for the world being saved".


SPECULATION What is the title of the episode referring to? Is it the start of a new evolution of the resistance, using Etta's face to get more dissenters on board? Or – more likely – does it refer to Peter becoming something new, a human being enhanced by Observer tech? The big question is, what will the implant in his neck do to him? Will its effects be entirely positive, giving him the ability to teleport and read minds? Or will it have some unfortunate side-effects, such as giving him unwanted Observer-traits like suppressed emotions. This being Fringe we'd bet on the latter – especially as he seemed strangely distant in his phone conversation with Olivia at the end of the episode.

SPECULATION 2 We don't want to jinx anything, but could Fringe 's fifth season be on course to be the most consistently brilliant season of anything ever? Four five-star episodes out of five is pretty impressive.

WHAT'S IN A NAME? Walter's having difficulty with Astrid's name again – and this time it's one of his worst guesses ever: "Abner" (as in Marion Ravenwood's dad). Perhaps it's grief talking.

Alas, Astrid's still not getting much interesting stuff to do, continuing her sterling work cutting through the amber, and going all Bletchley Park with her exemplary code-breaking prowess. Come on writers – give her something more exciting!

BEST LINE 1
Observer: "You don't even know what you don't know."


BEST LINE 2
Walter: "You must face this pain together. The pain is her legacy to you both. It's proof that she was here. I have experience of this... this sort of pain. And you can't escape it by building walls around your heart. Or by breaking the universe. Or by vengeance. You lost each other once. But you have another chance."
Richard Edwards