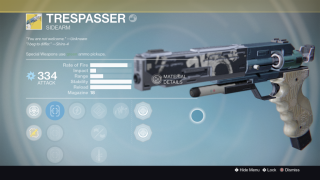 Destiny went down for extended maintenance yesterday in order to prep for the upcoming Rise of Iron expansion, and players have since dived straight into the deep end to see what they could find. Oh sure, there were the announced balance changes - but then some players found a new Exotic Sidearm, armor with Light that went beyond the current cap, and a ton of other secrets.

A Reddit post has compiled the entire, ongoing list of discoveries, but let me pull out a few highlights for you: there's the aforementioned arrival of the new Sidearm, called "Trespasser," armor that goes above the 335 Light cap is being decrypted from engrams, ornaments are now previewable in-game, the Plaugelands now appear on the map, the SABER Strike has new visual effects, PvP bounties have been tweaked, and four new shaders have appeared.

The list goes on and on, and it seems like there's more being added to it every minute. It would seem that yesterday's patch was more than it appeared, and with these new secrets teasing players to dig deeper, I wouldn't be surprised if we'll see even bigger revelations come September 20, when Rise of Iron launches.