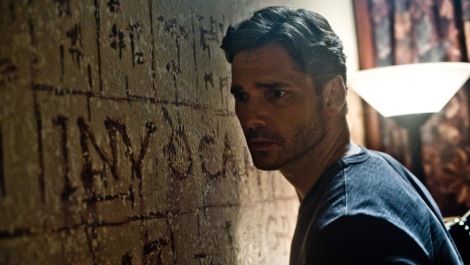 Directed by Scott Derickson ( Sinister , The Exorcism Of Emily Rose ) and inspired by the “actual accounts of an NYPD sergeant” (ahem), Deliver Us From Evil is toplined by Eric Bana as Sarchy, a Bronx cop whose ‘radar’ for trouble is actually a psychic link to the dark underworld of demons. A trio of hard-bitten marines return from Iraq possessed by an ancient evil, causing them to murder their own children or hurl themselves off roofs. It’s up to Bana and his trusty sidekick, blade expert Butler (Joel McHale, who is very clearly Joel McHale in every scene) to send them back to Hell.

Sean Harris stands out as a monstrous marine, imbuing every scene he skulks through with black dread. Unfortunately, there’s not enough of him. Most of the film’s running time is taken up by a misguided bromance between Bana and dashing Jesuit priest Mendoza (Édgar Ramírez) that hinges on hardcore Catholicism and gives the whole film a queasy wash of fundamentalist propaganda.

Another wild misfire is the casting of Olivia Munn in the role of Bana’s put-upon wife, Jen. Her honking Brooklyn accent is pure sketch comedy, easily the best/worst thing about the entire production. Still, after endless scenes of flashlights bobbing in disgusting hovels, gravel-throated detectives sauntering through midnight rainstorms, gratuitous butterfly knife-fu and more zoo animal attacks than you’d ever expect, Deliver Us From Evil eventually pays off with a full-tilt gonzo exorcism scene that neatly ties up most of the film’s head-scratching idiosyncrasies, including its frequent references to Doors lyrics, hieroglyphics and owls.

It’s loud, weird and explosive, to say the least, aided by a score that sounds like Nine Inch Nails stuck in an industrial clothes dryer. But is it scary? Well, there’s certainly nothing that suggests Hell is coming to your house. Sarchy’s water-logged world of dumpster babies and mental patients is as far away from any recognisable reality as the Land of Oz. There was a time when exorcist movies chilled the blood. That time was 1973. Let’s move on.