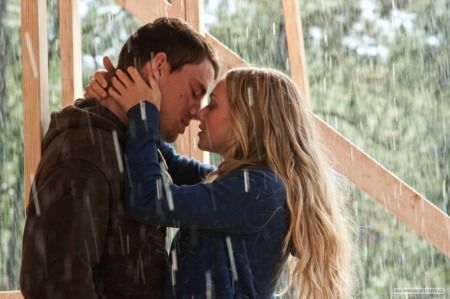 You just know the execs behind Dear John were fist pumping and chest bumping when they packaged the elements for this gooey romantic drama.

Take the bestselling romance-a-clef from author Nicholas The Notebook Sparks, chuck a pair of blazing Hollywood hotties – southern-fried beefcake Channing Tatum as soldier boy John and doe-eyed angel Amanda Seyfried as goodie-goodie student Savannah – into a love-soaked cauldron of sunset smooching, 9/11 flagwaving and long-distance heartbreak and voila! Who wouldn’t be lying back waiting for the cash tsunami to strike? No wonder the film opens with coins streaming through the presses…

Think twice before parting with your own hard-earned, though. This is a slothful weepie, plagued by a sickly mishmash of plot strands and a gaping chemistry hole at its core.

Dear John offers many of the same ingredients as The Notebook – young couple falling urgently in love, war-induced separation, epistolary exchanges and terrible disease. But where Nick Cassavetes managed to navigate past the soap opera to find a measure of dignified truth, Lasse Hallström has no such luck. The two-time Oscar-nominated director is off his game here, sacrificing storytelling to a succession of lazy montages.

It’s unfair to blame Tatum and Seyfried when they’re stuck playing cardboard cut-outs. The latter’s selflessness beggars belief as she housebuilds for hurricane orphans, launches a riding camp for autistic children and brushes dribble off Tatum’s chin. Hallström weighs the pair down with so many winsome close-ups that even ardent fans may long for them to pull an Edvard Munch Scream face just to shatter the monotony.