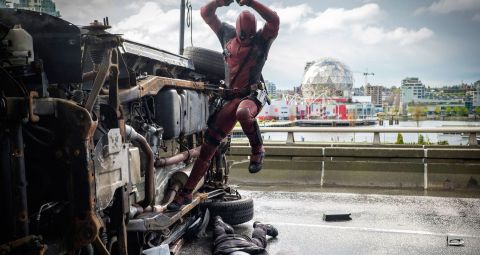 Loud, lewd, inventive and outrageous, Deadpool is a delight. All credit to Reynolds and co. for having the steel balls to go this far.

Ever seen the good guy take a bullet up the bum? What about teabag a villain? Or sing ‘Careless Whisper’? Have a Liam Neeson nightmare? Wear a Hugh Jackman mask?

All these treats – and more – come courtesy of Deadpool, the latest rubber-suited superhero to make it to the big screen. Actually, back up: “I may be super, but I’m no hero,” he tells us, amid a blur of irreverent, foul-mouthed fourth-wall-breaking.

Even the opening credits rip the piss. No names – just “A British villain”, “A moody teen”, “A CGI character”, “A gratuitous cameo” (all of which are true, by the way), “Directed by an overpaid tool.” The “tool” in question, Tim Miller, has created one hell of a sick and twisted superhero film (sorry, Deadpool, but that’s what it is), along with Zombieland writers Rhett Reese and Paul Wernick and producer/star Ryan Reynolds. Take a bow, gents.

We begin near the end, with Reynolds’ Deadpool riding in a taxi on his way to find Francis – or Ajax (Ed Skrein) as he prefers to be called. Cue one major pile-up on the freeway, as the acrobatic avenger takes out numerous Uzi-wielding minions with just a dozen bullets and a pair of knives. About to skewer Francis, he gets interrupted by two X-Men, metal mountain Colossus (voiced by Stefan Kapicic) and Negasonic Teenage Warhead (Brianna Hildebrand).

Confused? Don’t worry. Deadpool loves to narrate his own story, flashing back and forth until we’re all caught up. Rewinding to just over a year earlier, we meet his former self, ex-Special Forces deadbeat Wade Wilson, “a bad guy who gets paid to fuck up worse guys”. But then he meets Vanessa (Firefly/Homeland/Gotham star Morena Baccarin), a prostitute he falls in love with and proposes to. She accepts – but soon it turns out he has late-stage cancer.

Then a creepy guy in a suit makes Wade a proposition: give us your body for experimentation and we’ll cure you and turn you into a superhero. What’s he got to lose? As it turns out, only his liberty and his looks. Doing the experimenting is Ajax, ably assisted by the super-strong Angel Dust (Gina Carano), both veterans of this DNA-mutating program that seems to involve round-the-clock torture (ice baths, beatings, electrocution).

Turns out, these two want to create a race of super-slaves to sell off to the highest bidder. Losing patience, Ajax then deprives Wade of oxygen to the brain, frying his DNA and turning him into one ugly S.O.B. Looking “like an avocado fucked an older avocado”, as Wade’s bartender friend Weasel (T.J. Miller) later puts it, his face is “the stuff of nightmares”. So no wonder he can’t return to Vanessa, even after he escapes from Ajax’s facility.

Advised to get a mask, Wade becomes Deadpool – so named because the bar where Weasel works is running a sweepstake on who of their regulars is going to die first. Out for revenge, Deadpool has to find Ajax, who may just be the only person who can reverse his scarred face. But this isn’t really a film where plot matters too much. It’s the quips and asides that really drive this baby, ripping up the superhero rulebook with everything from gags about Star Wars and The Matrix to nods to Marvel’s arch-nemesis DC.

Cut to an eclectic mix of hip-hop, soft rock and ’80s classics, the action is fast and the narrative faster, all building to a riotous junkyard-set showdown. Largely covered in either a mask or prosthetics, Reynolds is terrific, relishing the filthy, frantic nature of it all. Baccarin makes her potentially cliched hooker-with-a-heart feel real, while Carano and Skrein are both more than capable of fulfilling their action duties.

As for the shaven-haired Hildebrand (or “Ripley from Alien 3”, as Deadpool calls her), she manages the sullen-teen act well. Oh, and Stan Lee’s “gratuitous cameo” is an X-rated gem.

Only Colossus is a little disappointing, the CGI almost as cumbersome as he is. But that’s nit-picking, given how well Deadpool fulfils its primary mission – pricking the super-egos of Hollywood’s comic-book blockbusters. It won’t be to all tastes – which is kind of the point – but it puts its money where its merc with a mouth is.

Loud, lewd, inventive and outrageous, Deadpool is a delight. All credit to Reynolds and co. for having the steel balls to go this far.