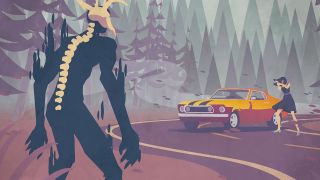 Dead Static Drive has got a new teaser trailer, and it shows off how it manages to blend classic Grand Theft Auto mechanics with a Lovecraftian world. The indie game from a single developer, Mike Blackney, doesn’t yet have a release date but it’s earned the curious eyes of many since its reveal in 2016.

As you can see in the gameplay teaser below, the original Grand Theft Auto top-down presentation is there, along with stealing cars, shooting guns, and running around a semi-open landscape. Where it diverges from that formula is obvious once you see towers of flesh violently growing out of the ground or when a roach-like monster gives chase to one of the game’s playable characters.

As the game has been developed mostly in secret for a few years, the trailer helpfully highlights some of the game’s interesting mechanics. It looks like you’ll have to fuel your cars to stay on the move - and try parking closer than the guy in the trailer. You’ll also apparently have multiple playable characters to choose from, or perhaps the story is told from multiple perspectives.

Outside of this teaser, we still don’t know a heck of a lot about Dead Static Drive, but that sort of mystery feels well-suited for a game like this. One thing we do know, at least, is which platforms it’ll launch on. Without a release date, you can expect to find Dead Static Drive on Steam and Xbox at launch, and it’ll also launch directly into Xbox Game Pass too.

If you need a more immediate Cthulhu experience, you can’t get any closer than Call of Cthulhu.