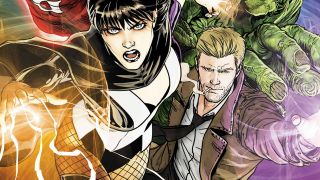 Justice League Dark, the DC supernatural superhero team, could be about to step into the limelight thanks to a new deal with the J.J. Abrams production company, Bad Robot. Through a new deal with Warner Media, Bad Robot is developing movie and TV show ideas that could feature JLD's John Constantine, Madame Xanadu, Deadman, Shade, the Changing Man, and Zatanna.

Deadline reported the deal, which seems to be very much at the drawing board stage, with Bad Robot’s head of motion pictures Hannah Minghella and head of television Ben Stephenson taking meetings. Still, just the thought of some more attention for the JLD is exciting, thanks to its cast of ghosts, fortune tellers, vampires, ghosts, and shapeshifters. No sad boy billionaire orphans or corn-fed farm boys here.

In 2013 there was a beautiful moment when it seemed like Guillermo del Toro would make a live-action JLD movie with the working title Dark Universe - starring Constantine, The Spectre, Deadman, Zatanna and Zatara - but by 2015 he was confirmed to be off the project.

John Constantine has already been seen on the silver screen, thanks to Keanu Reeves and 2005's Constantine, but the film's story featured some big changes to the source material. The JLD also got an animated movie in 2017's Justice League Dark.

Bad Robot is, of course, the production company that brought us mega projects like Star Wars: The Rise of Skywalker, Westworld, and Mission: Impossible – Fallout, and has an intimidating number of projects in development, including more Mission Impossible, more Star Trek, and a new HBO sci-fi show called Demimonde.

Need more Abrams? How about our look at Star Wars: The Rise of Skywalker: What is the J.J. Abrams cut? Does it really exist? Could it ever be released?