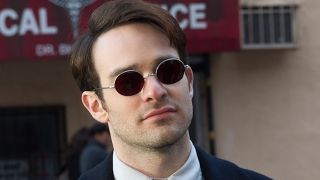 His devil-may-care attitude, breezy nature, and that huge spaceship, are but three reasons why getting to play a young Han Solo is something that every young actor dreams of. So when Disney announced plans for a spin-off focusing on Solo's adventures before the original Star Wars trilogy, every actor in Hollywood leapt at the chance to audition - including Daredevil's Charlie Cox.

At least, he's pretty sure that's what the audition he totally fudged was for. "I had gone to an audition," he tells THR, "one of those things that are super secretive and they don’t tell you, but I’m pretty sure it was for the Han Solo reboot— and halfway through it, the casting director stopped me and said, ‘Why aren’t you looking at me?’ I realized I had gotten into a habit of not making eye contact, because the only thing I had done for two years is play someone who is blind. I never got invited back, probably because they couldn’t figure out why I was acting like a complete idiot."

Aside from what actors normally do to get in character - weight gain, weight loss, turning into a demented sender of used condoms - could this be the one 'normal' drawback of being too method? Still, Cox is doing alright for himself. After flunking a life-changing audition that 2500 young actors hoped to nab he gets to return to a hugely successful TV series of which he is the star. It's not all bad.