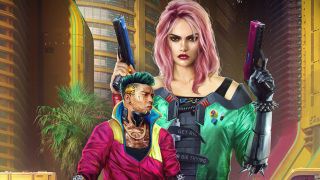 Cyberpunk 2077 is shaping up to be a nuanced look at a possible and dark future for humankind. So obviously, when I sit down with CD Projekt RED's quest director on the game, Mateusz Tomaszkiewicz, one of the first questions I ask is about banging.

"We do have romances in the game, and I don't want to get into how many we have at this point," he says. "However, you can engage in relationships with different entities, and we believe that each of these NPCs is an interesting and strong character who would be quite memorable, and they have their own goals. They have their own ideas about the world and so on. And you can engage with them, interact with them and their moments."

I'm not just asking about my chances of getting laid in Cyberpunk 2077 because I'm a garbage person, I'm asking because it was something CD Projekt RED got so right with its mega-hit, The Witcher 3. Your version of the hero Geralt was shaped by his romantic relationships with Triss and Yennefer. Tomaszkiewicz didn't elaborate on whether or not you could romance Johnny Silverhand – a role played by Keanu Reeves – but seeing as he's playing a ghost that haunts a chip in your brain, it's unlikely.

From cybersex to cyberspace

Something we saw in the behind-closed-doors gameplay demo at E3 2019 (you'll get to see it during PAX West August) was our first look at cyberspace. At the end of the demo, V has gone to meet Maman Brigitte, a member of the Voodoo Boys gang, to get jacked into cyberspace. The cyberspace – a sort of virtual world of data that your brain turns into a physical landscape –  in Cyberpunk 2077 has seen huge disturbances.

"At some point in the timeline, this legendary net runner has released a number of vicious malware, like rogue AIs and so on into the web, which caused the cyberspace to become, like, unstable. And it caused this global crisis for the corporations, for the people and so on," explains Tomaszkiewicz. An entity called Netwatch was created as sort of a cyber police force, and they created a virtual cordon with cyberspace called the Black Wall.

"In the present times, most of the people in the Cyberpunk world are using local networks. It could connect to the access port and you could hack devices in this local network. However, the original cyberspace still exists," he continues.

How much time will you spend in there? Tomaszkiewicz doesn't want to say, but he confirmed it's an important part of the game.

Another of The Witcher 3's strengths was its side quests. You never knew when they would evolve from a simple mission to a twisting, weird, and wonderful adventure. You can expect the same, perhaps with fewer werewolves, in Cyberpunk 2077 too. "So at the moment we have a number of side activities that players can partake in. In terms of actual mini-games, we have the hacking that you might have seen on the demo, we have car races, we have like martial combat in the different parts of the city, and we have things like a shooting range."

In The Witcher 3, the side quests also allowed the game to take a break from hardcore serious fantasy face for a while. Some were strange, and some offered CD Projekt RED the chance to play around with talking horses and fairytales. The studio is planning to expand on all of this for Cyberpunk 2077, promising a few smiles even as you hack and shoot your way through serious dystopian business.

"We had actually long discussions about this. How should we approach this and what kind of humor do we want to have, and cyberpunk and so on. And yes, we have a lot of side content within the game aside from the main storyline, which, first of all, it can play out in more ways because we can allow the player to fail the side quests. So based on how you talk to characters, you know, we kind of have different outcomes even more so than the main storyline. We wanted to have a variety of interesting content that is engaging and interesting and memorable just like you did in The Witcher. "

Like in The Witcher 3 , those side quests will stay faithful to the story and the world. Don't expect a chatty equine to rock up as you're investigating a lead in a poverty-stricken section of Night City, for instance. Laughter isn't always the best medicine.

"I think we followed the same principle in The Witcher. Like, we tried to make it tonally appropriate for specific areas. And where we could have it funny, we had it funny. But you know, if it was a war-torn area where there are widows and stuff, you know, making light of that actually wouldn't make much sense."

Working with the original Cyberpunk

Just as The Witcher games were based on the work of a Polish author, Cyberpunk 2077 builds on a world created by Mike Pondsmith. He created it in 1988 for Cyberpunk: The Roleplaying Game of the Dark Future, and went on to create new stories like Cyberpunk 2020 and Night City. CD Projekt RED is working with him to make sure its world stays true to his vision.

"You’ve got to understand, this crew, many of them grew up playing this game," Pondmsith says of CD Projekt RED. "So there’s a love letter for tonnes of things in it, and even now, I’ll be looking through a scene and I’ll go, 'Oh my God, they crammed that in.'"

He describes himself as less of a licensor and more of a partner, and he clearly admires the passion that the game team has for his creation and the messages inherent in the dystopian world."2020 is mad against inequity," he explains. "There are massive power imbalances, and corporations run everything, and you’re under their thumb. Cyberpunk Red [the upcoming tabletop prequel to Cyberpunk 2077] is mad against despair. It goes to hell, and people have to decide where they find hope, and what they do with it."

"2030 is mad against collapse. The world goes to hell, and we have to rebuild it. And finally, 2077 is mad against corruption. We’ve got ourselves back, but now the subjects – the way that we are – is being warped by that success. In 2020, people don’t use cyberwar quite as much as they do in 77. In 77, it’s a fetish."

Now that we finally have a release date, we can hope to see more from CD Projekt RED, who have been careful not to share too much about the project so far. "Everyone in the office is focused right now and everyone understands what's at stake and what we want to achieve," says Tomaszkiewicz.

At least the pressure is off on keeping Keanu Reeves a secret. "Not everyone in the studio knew about the deal we had made with Keanu and that he would be performing for us and so on," he says with a laugh. "But once they did, we had this code name that we were using inside the studio. We are calling him Mr. Fusion"

Cyberpunk 2077, and Mr Fusion, will be released on April 16, 2020. Now to research a cryogenic chamber to keep me asleep until then.