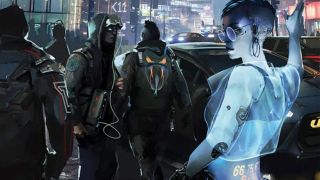 We spoke to Mike Pondsmith at E3 2019 to probe him on some of the themes that will run through Cyberpunk Red in preparation for Cyberpunk 2077, so even if you're going all digital with your Cyberpunk experience and will skip the tabletop, there's some interesting tidbits that will get you ready for the release of Cyberpunk 2077 in April 2020. Read on, intrepid dystopia explorers.

The real title of Red is Cyberpunk: The Time of the Red

Whereas the other Cyberpunk books have had years for titles, this latest edition will feature the title 'Red', and it starts with an explosion.

"It’s Red. Actually, it should be Cyberpunk: The Time of the Red," explains Pondsmith. "So what happens is, I blew up the centre of the whole of Night City with a nuclear weapon, and that was so I could get rid of – as far as anyone could tell – all the old signs of the previous incarnation, and move onto the next arc, which, at that point, was starting before I’d actually met the guys at CD."

That means (before you get any ideas) that Cyberpunk Red was a storyline that existed before CD Projekt Red got involved, and that naming scheme is just a happy coincidence.

"What had got me thinking about it was, during all the fires that we’ve had, both in California and Washington and elsewhere, you’d get up in the morning and the skies would just be pitch red. They were like blood… So basically, for the first five years after the bomb and the corporate war and all this stuff that goes down, and a couple of nuclear rocks – all that stuff happens – the skies are red for months. And then it begins to settle."

"And so finally, after about two years, you have violent red sunrises and sunsets. And so the people involved double their time with red. And that was what I had in mind [for Cyberpunk Red]." That's quite the way away from the neon dazzle of Cyberpunk 2077, but really sets the scene for Cyberpunk Red starting a new narrative chapter for the series.

Cyberpunk Red is being used to reset things

And that narrative just happens to start with a big old explosion; one that will completely reset things in the world of Cyberpunk, including the biggest bads that haunt Night City.

"So I sit down with my production manager and best friend, and he and I basically said, 'How do we destroy this entire thing without destroying it?' We realised that there are ways – which you’ll see in Red – to wreck a technological society, and still have a technological society. There’s some really interesting subtle things there that are going to be really interesting to people, because they’re things that underpin our societies now, and no one ever thinks about them."

And that's clear as we move through the different themes offered by all of the books that accompany the tabletop RPG. According to Pondsmith, he only realised clearly what these themes were about 20 minutes before we sit down for our E3 2019 interview, but they put Cyberpunk 2077 in an interesting space full of tech fetishes and a movement against corruption, against Red's post-nuclear explosion despair.

"[Cyberpunk] 2030 is mad against collapse. The world goes to hell, and we have to rebuild it. 2020 is mad against inequity. There’s massive power imbalances, and corporations run everything, and you’re under their thumb."

"[Cyberpunk] Red is mad against despair. It goes to hell, and people have to decide where they find hope, and what they do with it."

What that means for Cyberpunk 2077 is quite interesting then, as it's been some 50-odd years since the events of 2020, with Red sitting in between. And from the sounds of it, the citizens in 2077 will be in a much better position technologically.

"The materials inside your Apple [he points at my Macbook), they all come from around the world. They’re all shipped by container machines. 98% of everything we used is shipped by container… dumped somewhere else… shipped to some other factory, and eventually shipped across to wherever you got it. If I break that chain, you're going to lose the ability to have that [piece of technology]."

"Last year, three billion cell phones were made in the world. With a “b”. Three billion cell phones.  Now, think about this. Society doesn’t make this computer anymore, but in thousands of containers around the world, stashed in databases that may be broken, there are 10 billion SKUs of this computer. So all I have to do is figure out where they are. So I can have a technological society, but it becomes more like a cargo cult."

"So old-fashioned tools, weapons and gear pop up, along with brand new super-modern stuff. And so you have a technological society, but it’s much more of a jumble, and people find it and make new stuff.

"In ’77, it’s all gotten started again… My counterpart, [quest designer at CD Projekt Red] Patrick Mills, and I worked out how long it takes for us to get society back up again to where we have a consumer society. This is the beauty. Cyberpunk in ’77 is about consumerisms, because the last 40 years had not been able to have consumerism. You couldn’t go and get whatever you wanted. Now you can go and get whatever you want."

If you want to know more about Cyberpunk 2077, here's what we know about the Cyberpunk 2077 endings so far, or look below to watch our preview of the game from E3 2019!