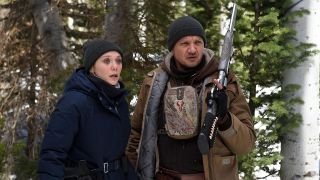 Remember when Jeremy Renner was a combustible character actor whose volcanic eyes threatened to torch the celluloid of S.W.A.T. and The Hurt Locker? You know, before he hoisted the Bourne and Mission: Impossible franchises upon his sturdy shoulders only to buckle at the knees, and before his Hawkeye got to quiver, ready for action, at the edges of the frame while Iron Man, Captain America, and Thor did their things?

Fine, then Wind River is for you. It’s directed by Taylor Sheridan, which if you’ve seen his grotty horror debut Vile, is something to be afraid of… until you consider he also wrote Sicario and Hell or High Water. This atmospheric, hard-bitten noir-cum-revenge-western is far closer in flavour, themes and quality to those movies, and also recalls such thrillers as the Coens’ No Country for Old Men, Sam Raimi’s A Simple Plan and John Dahl’s Red Rock West, as well as Larry Fessenden’s underrated folklore horror Wendigo. Set in a pocket of Wyoming where the only choice is “to survive or surrender”, it makes the most of its snow-smothered landscapes and vividly earthy locals.

Renner plays Cory Lambert, a local US Fish and Wildlife Service agent who discovers the body of an 18-year-old woman in the wilderness of the Wind River Indian Reservation. The FBI send rookie agent Jane Banner (Elizabeth Olsen) to investigate the death, and the pair pool their respective skill sets to navigate the harsh terrain, both geographical and political.

Like Hell or High Water, this is a movie of vast, desolate landscapes and grinding poverty, and also like Hell or High Water, its themes are offered up a little too stridently. But Taylor’s writing sure knows how to load up on the feel of a place, and here his terse direction is similarly soaked in atmosphere, savouring the rhythms and rhymes of this hardscrabble environment before shattering the spell with bouts of explosive violence.

Racial tensions add another layer of scratchy frost (though the film’s open to Mississippi Burning-type criticisms of focusing on the white characters), and Olsen’s Banner is tougher than she looks, refusing to be cowed by the obdurate men who dominate this cruel territory.

But it’s Renner’s film, the role of the grief-stricken, taciturn and surprisingly tender Lambert fitting him as snugly as his cowboy hat. Watch it and you’ll be convinced, anew, that he should be steering a major franchise. Or maybe just taking on more parts like this one.