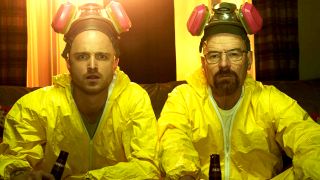 Even if you’ve never heard the term ‘bottle episode’ you’ve seen one. More than one. And the chances are it was probably one of your favourite moments of [insert show you like here]. They’re the episodes that are made to save money, often through using a few well-used, familiar sets, and some of the principle cast. The term comes from the nickname ‘ship in a bottle episodes’ used by the cast and crew of the original Star Trek series to describe the stories that never left the ship.

Starting to sound familiar? We’ve all seen those episodes set in a single room, or with only a few actors; the ones that look like they were probably made fast and cheap. Because they were. They’re a tactical part of TV production often used to funnel budgets into bigger set piece episodes or to cover a production hiccups requiring something to be made quick and simply. A 1964 episode of Doctor Who called The Edge of Destruction is a great example here, and one of the the earliest examples of the concept. It’s a two parter that had to be made for more or less no money because it had all been spent on the previous episodes. The solution: set the whole story in the Tardis and only use the four principal cast members.

However, you shouldn’t look down on these more reductive efforts. Strange things happen with bottle episodes - the lack of money and options forces writers and producers to get creative with ideas, scripting and characters. Often, these moments end up being some of any given series’ most acclaimed creations. Those constraints push things out of their comfort zone, risks are taken and smaller details have time to shine.

Take Star Trek: The Original Series’ Balance of Terror. Effectively a submarine movie in space with a cloaked Romulan Bird of Prey as the sub (and almost the same plot as actual submarine movie, 1957’s The Enemy Below). This sees a tense standoff between Kirk and a Romulan captain playing out largely on the two ship’s bridges. It’s drawn a lot of praise for its pacing and scripting as, deprived of much to play with in terms of location and special effects, it relies heavily on the dialogue and performances. Explosions and phaser blasts are replaced with the two ship captains’ begrudgingly growing respect for each other, and the building pressure of a slow burning life and death encounter.

Bottle episodes aren’t the just for sci-fi shows either - although given the increased costs of their fantastical special effects and sets, they’re often a popular way of dealing with production issues. The ‘90s sitcom Friends’ episode The One Where No One's Ready was little more than the main cast in Monica’s flat preparing to go out. That didn’t stop it becoming one of the show’s most popular episodes, drawing on and expanding each of the characters’ worst traits to create what was essentially a single set theatre farce played out in real time. Ultimately it was so popular that the producers decided to schedule one bottle episode each season afterwards.

You could argue that a lot of sitcoms are basically bottle episodes by their very nature. Friends spends A LOT of its time in characters’ apartments and a coffee shop. Other shows like How I Met Your Mother repeat that template but swap Central Perk for a bar. The same bar. Every episode. They’re shows that are already designed to be cheap but that doesn’t mean their bottle episodes always work out that way. A Seinfeld episode called The Chinese Restaurant was written around the simple idea of the cast waiting for food. It ended up costing just as much as a normal episode of the show though because they had to build an entirely new set from scratch.

But, usually, these episodes are created from a need to keep things simple and creativity thrives on those constraints. Limitations that could be seen as a restriction becomes frameworks to build on, expanding established characters and often exploring them in a depth and detail that wouldn’t be possible with an extended cast and locations. Breaking Bad’s season 3 episode Fly is a perfect example of this. With the show massively over budget, creator Vince Gilligan concocted an episode set entirely in a meth lab starring only the two main characters, Walter White and Jesse Pinkman.

On paper it sounds like a disaster: the entire episode consists of two men talking while trying to catch a single fly in one room. But it uses that premise to explore some pretty deep parts of the characters’ lives, regrets, and feelings around what they’ve done in the show so far. It was directed by Star Wars 8’s Rian Johnson and, while slightly divisive among critics, drew praise for Johnson’s touch, as well as its portrayal of its two leads roles. Airing towards the end of the third season both had done plenty of bad things, but this episode particularly played well with Jesse’s apparent care for an exhausted, near-breakdown White, while constantly threatening to reveal the latter’s (at the time) darkest secret. It gave you time with the pair in a way that the normal show wouldn’t have been able to. And, at the same time, let White teeter around a potential megaton confession that drew out the tension to almost unbearable levels.

Ultimately bottle episodes only really work because they break from the norm. A change in pace that, intentionally or otherwise, adds breathing space to a show or builds out characters. Not a great deal might happen on a grand scale, but don’t confuse this with nothing happening at all. Often bottle episodes are full of meaningful events and significant beats, the grain is just finer and the threads more tightly woven. It doesn’t mean the fabric of the show is any less weighty as long as you know what you’re looking at.