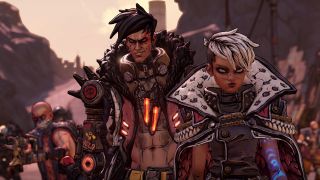 If you're planning on marathoning Borderlands 3 on PC as soon as it comes out, you may have to build some wiggle room into your plans. Epic Games CEO Tim Sweeney himself confirmed in a Twitter response to a fan that the Epic Games store, which will be the only place to buy Borderlands 3 on PC at launch, will not support pre-loading for the game.

I’m sorry, we won’t have support for preloading in the Borderlands release timeframe.August 12, 2019

Sweeney's Tweet confirms that Epic is still working on bringing pre-loading to the store. According to the public-facing Trello board that Epic maintains to keep the public up-to-date on current and planned features for the storefront, pre-loading for third-party games was enabled back in May. This is true, Sweeney says, but also "complicated".

It’s Complicated. We’ve released support for file preloading which is sufficient for some games, but we aren’t certain it’s up to the demands of a blockbuster like Borderlands.August 12, 2019

I get why Epic wouldn't want to test out a relatively fresh feature on game like Borderlands 3. There's a good chance Borderlands 3 is going to be the most popular game on the storefront outside of Fortnite, which means a whole lot of people would be trying to pre-load it all at once. That could go wrong in all kinds of ways, from super-slow download speeds (making pre-loading almost pointless) to knocking down the storefront itself and not letting anybody play, and all kinds of things between.

Still, that doesn't make it any less disappointing for PC players who were hoping to start playing Borderlands 3 as soon as possible, especially folks with slower download speeds who may have to wait quite a while after launch. I've reached out to an Epic Games representative to see what the studio's plans are for bringing pre-loading to more titles on the store, and I'll update this story with any response.

You can watch the 14 minutes of the Borderlands 3 opening gameplay right now, whether or not you'll be able to pre-load the game on your preferred platform.